The Tallest Standing Buddha in the World 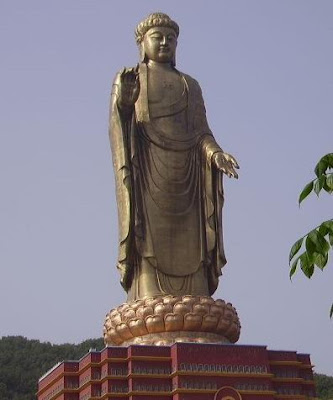 On 29.9.2008, 108 eminent monks and thousands of lay devotees from the mainland and overseas gathered at Foquan Si monastery of Lushan, Henan province to consecrate the 108m tall Lushan Great Buddha - the tallest standing Buddha image in the world today. If we include the 20m tall lotus pedestal, the image would stand at an awesome 128m! 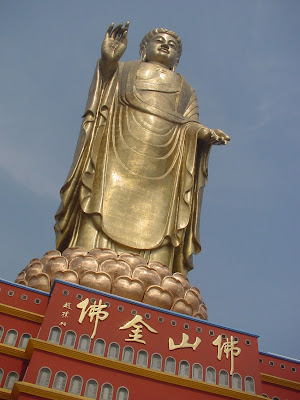 The monastery where the Buddha is located - Foquan Si also boasts a thousand-year old history, one of the oldest in the province. It has the Yuzhen mountain behind as support and Sha river in front as its courtyard water source, forming its excellent Fengshui and making it into a unsurpassed site of pilgrimage for local and overseas Buddhists. 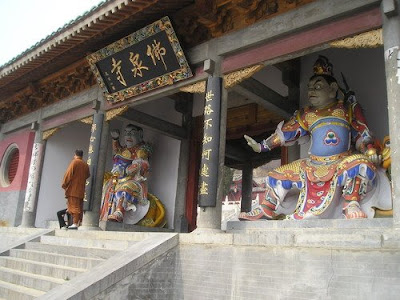 Above is the entrance of Foquan Si, flanked by 2 fierce Dharma protectors. The grand consecration ceremony was led by famous masters such as Elder Yicheng, chairman of the China Buddhist Association; Elder Jueguang, chairman of the HK Buddhist Federation; Elder Xingyun, Founder of Foguang Shan in Taiwan; Ven Yongxin, Abbot of Shaolin temple; Ven Yanfo, Abbot of Foquan Si as well as Ven Shenghui, Xuecheng, Jingxiong and Haitao. Everyone present prayed for peace and prosperity for the whole nation. Celebrity singers from China and Taiwan were also invited to sing in praise of the auspicious occasion. 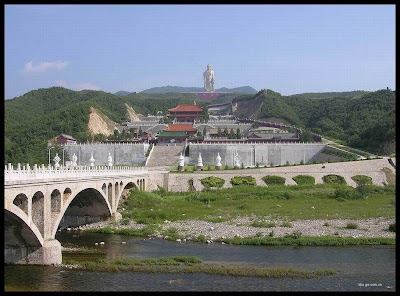 A distant view of Foquan Si and the Lushan Great Buddha. Such a huge image is constructed with 2,700 tons of yellow & purple copper, 100kg of gold as well as 3,700 tons of steel columns to support it from within! No other image in the world can match it in terms of height and size. At 108m tall it dwarfs even the 88m Lingshan Great Buddha in Wuxi (a similar standing image), as well as the 71m Leshan Great Buddha in Sichuan. But the Leshan Buddha is a seated image, so it should not be compared to standing images in terms of height. 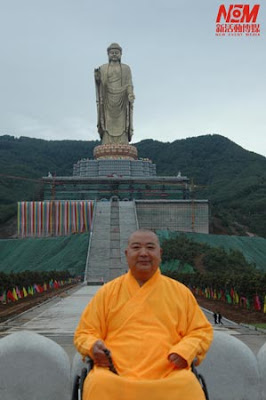 The Abbot of Foquan Si, Ven Yanfo. He spent 12 long years garnering support for the Buddha image to be built for the benefit of all beings. It was in 1997 that he got the support of donor Mr Li Liufa, a prominent corporation head in Henan to start with the construction. 10 years later, after spending a whopping 280 million RMB, the Great Buddha was finally completed last year in 2007. It was not until September this year that the monastery decided to conduct a grand consecration ceremony for their Buddha image. Now that it has been properly consecrated, everyone hopes that the light of the Buddha's wisdom will shine on the whole of China for a long long time to come, sadhu.
Posted by Wayne Woo at 1:15 AM

Please accept my respect to those who built and contribute to this marvelous statue of Lord Buddha. You all have collected lot of merits by this act.
thank you
Dr D.P.D Wijesinghe