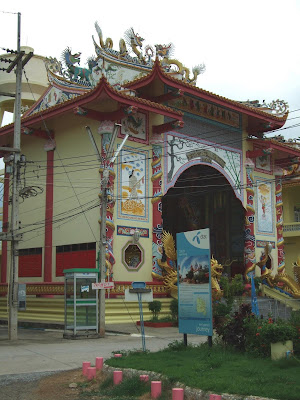 Wat Muang is a famous temple in Ang Thong province with a large Buddhist theme park. Above we see the Chinese Shrine to Bohisattva Guanyin. 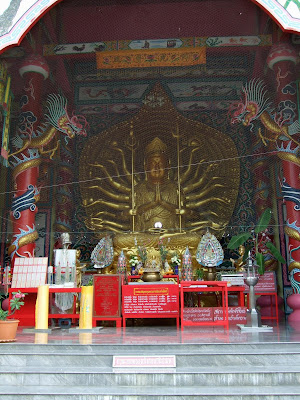 The Thousand Arm Guanyin statue inside the shrine. 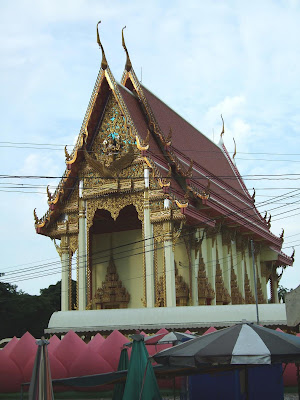 The temple has 2 Ubosots, Gold and Silver. This is the gold one. 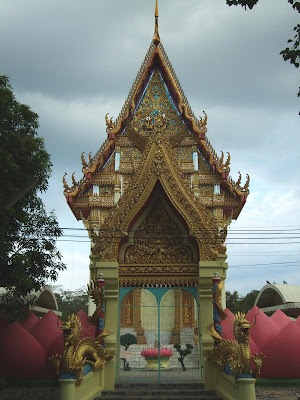 Another angle of the Ubosot. It has Chinese Dragon guardians and many lotus sculptures outside. 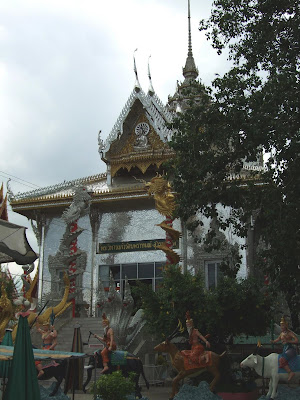 The silver Ubosot is where the monks perform their daily chantings. There are many Lersi statues outside. 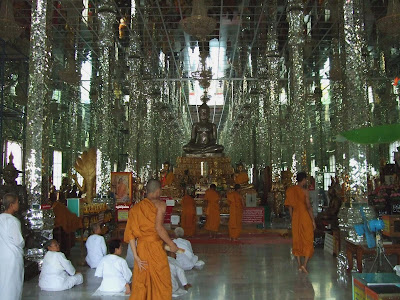 Inside the silver Ubosot. It is filled with mirrors creating an effect of infinite space. 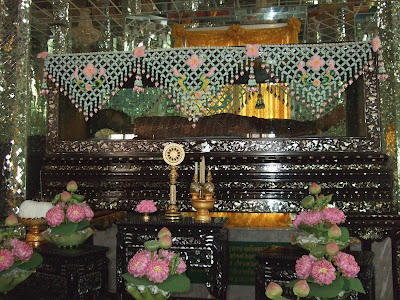 The undecaying body of Ajarn Kasem, the previous abbot. It is venerated inside the silver ubosot. 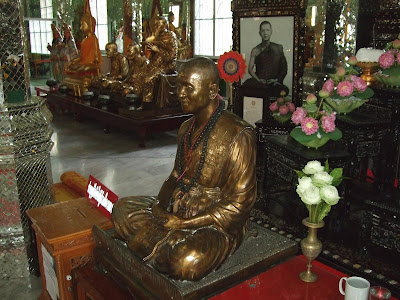 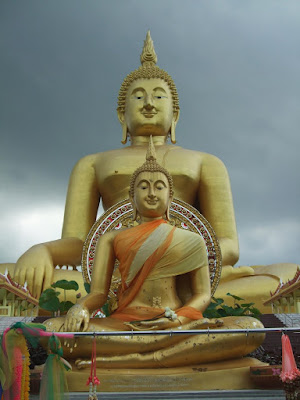 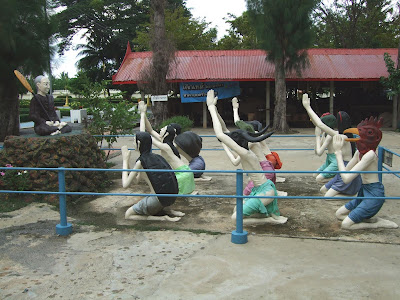 Now we come to the Hell Park. This is Phra Malai preaching to the hell-beings on Uposatha days. 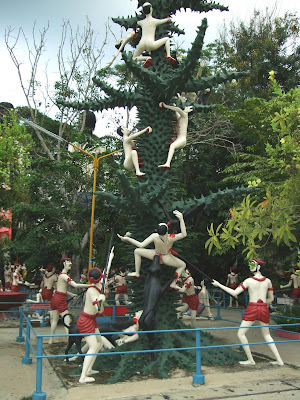 The barbed tree where sinners who commit sexual misconduct are forced to climb up and down by the torturers and their hell-hounds. 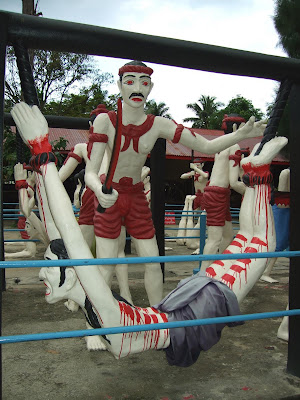 A woman sinner who like to cheat others being hanged by her limbs and mercilessly slashed by her torturer. 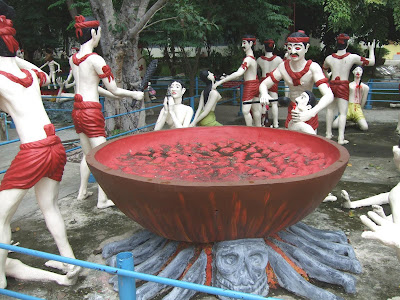 Sinners who are addicted to alcohol and other intoxicants are force to drink boiling metal liquid by the torturers. 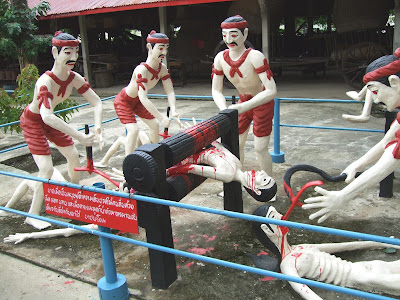 Sinners who constantly lied, abused or slandered others have their tongues hooked in hell, or are forced through the meat grinder. 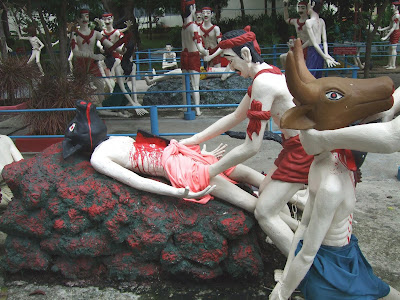 Those who killed, murdered or slaughtered other beings are themselves slaughtered alive by the torturers in hell. They die and keep coming back to life to go through the same torments again and again due to the force of their own evil karma. 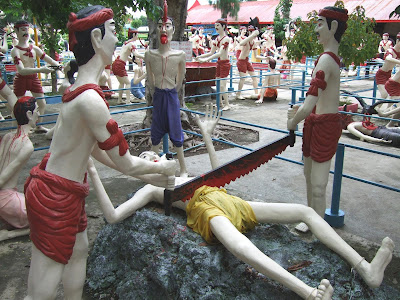 And there are the thieves and robbers, who are impaled and sawed up in hell. 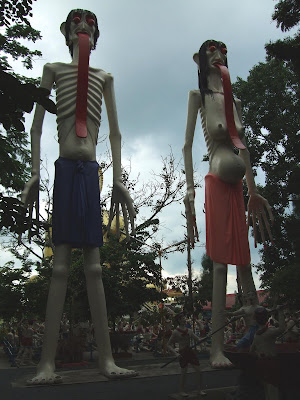 Tall statues of male and female hungry ghosts, who have to suffer constant hunger and thirst. 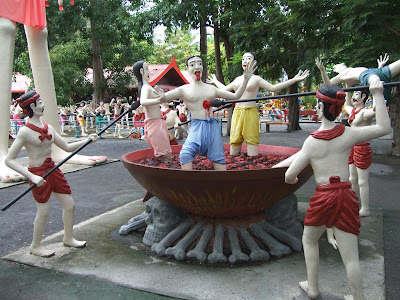 The ungrateful sinners who repay kindness with evil are thrown into the wok of boiling oil to be fried alive. 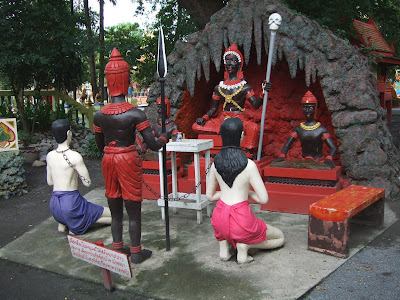 The Hall of hell where King Yama and his judges decide on the appropriate punishments for the sinners, in accordance to the unwholesome deeds that they have committed. Every good or evil karma done shows up in the judges' record books without fail. 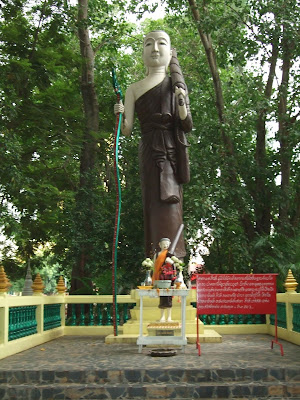 A statue of Phra Sivali, the symbol of great merit. Indeed merit is the thing that sustains all beings; for without merit beings are doomed to suffer endlessly in the wheel of Samsara. The Hell Park serves to reminds us to avoid evil and make as much merit as we can when we are alive. Once we die and fall into the lower realms, it will be too late to repent.
Posted by Wayne Woo at 5:05 PM

What does the Thai inscription on the Guan Yin statue say? Why is it covered in a net?

Also, I notice a lot of Thai temples have really big candles, but they are not lit, and the incense pots are sometimes empty. Why is this so?

Thank you for your replies!

It says "Phra Mae Kwan Yim Bodhisat". The net is to prevent birds from flying inside.

Those big candles are only lit on special occasions. The incense urns that are empty are not meant for people to put joss sticks.

Really interesting Theme park.Is it near Bangkok?Hope I have chance to visit the park.

Its 2hrs away from BKK by car.

Thank you for this very interesting article. This is a temple I should visit as soon as I can.

what a beutiful place to visit. I hope I can be there, my mind was very peaceful once I saw those pictures.
Thank You for sharing.
Regards