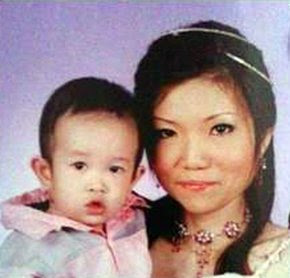 Currently there is a very hot news report in the local Chinese papers Shinmin and Wanbao regarding the double suicide case of Ms Chen Shishi and her son. In a bid to foil her ex-husband's attempts to get custody of their son, and also out of rage and frustration, Ms Chen drowned herself and her son together in Bedok Reservoir. The marriage of Ms Chen and her husband were fraught with many problems from the start. Eventually they had a bitter divorce when the husband Chen Yanxing had an affair outside. But Mr Chen still wanted to get back his son despite their tense relationship, so after many fights, it led to the tragedy of a double suicide. 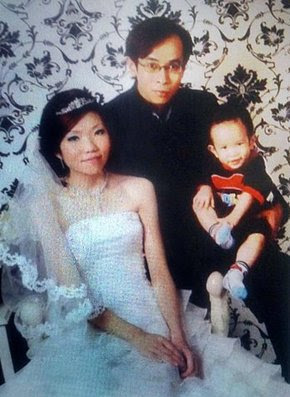 Family portrait of the Chens during happier times. Both mother and son wore red when they committed suicide, and they died with their eyes wide open and almost popping out. So much so that their eyes could not be closed even after they were embalmed for the funeral wake. According to Chinese beliefs, this signified that they died with much anger and hate in their minds. LP Jaran once said in his Law of Karma books that those who died with strong clinging in the minds became hungry ghosts 饿鬼 and those who died with anger became demons 恶鬼. Such ghosts are very difficult to deliver or 超度 due to the strong hatred 怨气 consuming their entire consciousness. They will not let go or give up until they take revenge on the party who aggrieved them. A good example was the ghost Mae Nak, portrayed in many Thai horror movies. No exorcist could subdue her and only someone as highly attained as Somdej Phra Puttajarn Toh could pacify and deliver her from that demonic state. 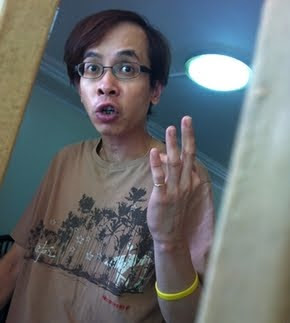 The ex-husband still defiant yesterday, when questioned by reporters. He denied being responsible for the suicide of his ex-wife and son. However I see dark Chi clouding his eyes and forehead and know that he is going to be in a lot of trouble soon. Needless to say the vengeful spirits of the mother and son will not let him off so easily. 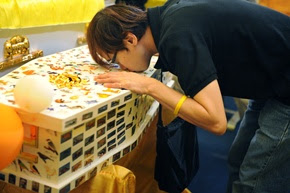 Chen Yanxing's attitude softened later, after he saw the gruesome corpse photos of the mother and son, said to be rotting yet still with eyes wide open. So he secretly went to the funeral wake early this morning to "apologise" to both of them and gave many child offerings to the casket of his son (none for the wife though). He had to go when all of the relatives were still asleep as he was afraid of being beaten up. Unfortunately such a superficial gesture won't appease the angry spirits who will haunt him for a very long time. It also won't save him from the calamity that will befall him soon. The only way for him to lighten his karma is for a highly attained monk to be the peacemaker and preach to the angry spirits so that they may give up on seeking revenge (unlikely in Singapore); or he must ordain to become a monk and deliver them himself. If he does not repent his sins, nothing can save him from the fruits of his evil karma.
Posted by Wayne Woo at 12:05 AM

Mr Chen's definitely going to have lots of bad luck. Can even see the dark qi from photo. But this mother also very bad karma. How could she forced her kid to die with her?