Some subjects of meditation 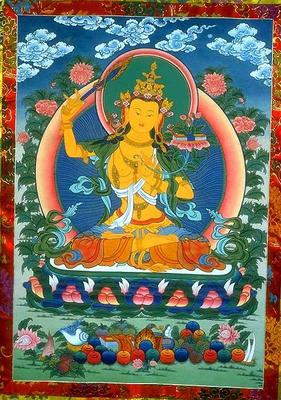 True meditation is not about sitting down with crossed legs and focusing on your breath as most people think. The Mahayana way of meditation is neither sitting or focusing on anything at all, for its purpose is to see your own Buddha-nature and realize enlightenment. In the past when Master Mazu sat in meditation, his teacher Huairang asked him what he was doing. Mazu replied he was trying to meditate and achieve Buddhahood. Huairang said nothing, but he took a piece of tile and start polishing it in front of Mazu. This time it was Mazu who asked his teacher what he was doing. Huairang replied he was trying to polish the tile into a mirror. Mazu questioned how could a tile ever be polished into a mirror? Huairang asked him in return how could sitting in meditation lead one to Buddhahood? Mazu was dumbfounded. Huairang went on to ask him that if a bullock cart refuse to move forward, do you as the driver whip the bull or the cart? And from there, Mazu realized what was the true path to follow. The cart refer to our body and the bull our mind - it is the mind that attains Buddhahood, not the body. And so the practice of Dhamma should be based in the mind and not on physical form.

Here are some Buddha Koans that can be used in your meditation, extracted from the "Pointing at the Moon Records":

1. One day the Buddha sat on the high seat getting ready to expound the Dhamma. So Ven Maha Kassapa knocked the pestle on the ground and declared: "The World-honoured One has finished his sermon!" At this the Buddha got up and left.
For this Koan, meditate on "when did the Buddha give a sermon?"

2. Once the Buddha took a colour changing Mani Jewel and asked the 5 Celestial Kings: "What colour is this jewel?" Each King saw a different colour and responded accordingly. The Buddha then hid the jewel and asked them the same question with an empty hand. The Kings replied: "There's no jewel in your hand, Lord, so how can there be any colours?" The Buddha said: "How deluded you all are. Earlier I showed you a worldly jewel and each of you told me of a different colour. Now I am showing you the true jewel, yet you do not know it!" At that moment, the 5 Celestial Kings all attained enlightenment.
For this Koan, meditate on "what is the true jewel?"

4.There was a Rishi who have attained the 5 supernormal powers (Clairvoyance, Clairaudience, Telepathy, Recollection of past-lives & Mind-body projection) asking the Buddha: "World-honoured One, you possess the 6 supernormal powers, whereas I only have 5 powers. What is the 6th power?" The Buddha suddenly exclaimed: "Rishi!" The Rishi answered: "Yes, lord?" Buddha: "That power; why do you ask me?"
For this Koan, meditate on "what is the 6th power?"

By meditating, it does not mean that you have to sit down all the time, but constantly contemplate on the answer to any of these Koans no matter whether you are sitting, walking, standing or lying down. When the time is ripe, this one thought of fluctuating ignorance will break through your fundamental ignorance and allow you the see your true Buddha-nature. This is the method taught in the Mahaparinirvana Sutra, and also the direct path of the Chan or Zen school. May you have swift progress on the path to enlightenment, sadhu.
Posted by Wayne Woo at 1:00 AM 1 comment: