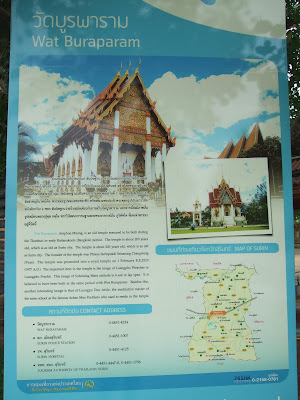 Wat Buraparam lies in Surin town. This old temple is famous for 2 things - its sacred Buddha image Luang Por Phra Chi and the master who used to teach here. This master was none other than LP Dun, a famous disciple of LP Mun. LP Dun passed away in 1983 at the age of 96. LP's last words to his disciples before he entered Parinibbana were:

"The Lord Buddha didn't attain nibbana in any of his jhanic attainments. When he left the fourth jhana, his mental aggregates all ceased at once, with nothing remaining. In other words, he allowed his feeling aggregate to cease in an awake state of mind, the normal human mental series, complete with mindfulness and alertness, with no other mental states coming to blind or delude the mind at all. This was the mind fully in its own state. You could call that state great emptiness, or the original cosmos, or nibbana, whichever you like. That's the state I've been practicing all along to reach." 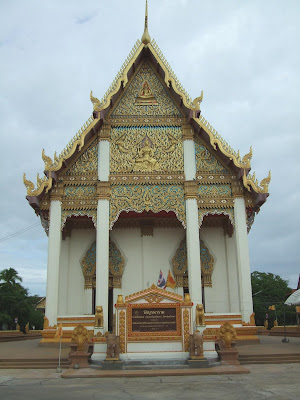 The Ubosot of Wat Buraparam. 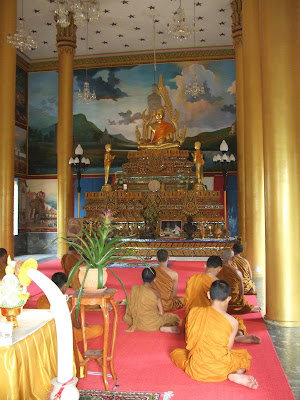 Inside the Ubosot, the monks were doing their morning chanting. 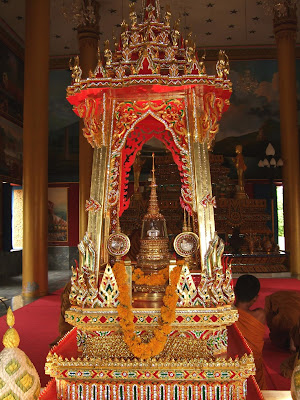 A crystal chedi containing the relics of the Buddha. 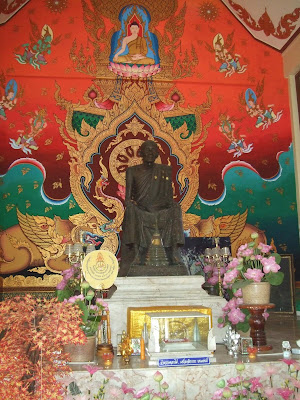 A statue of LP Dun inside the LP Dun Vihara. 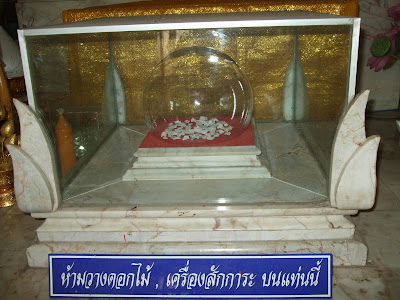 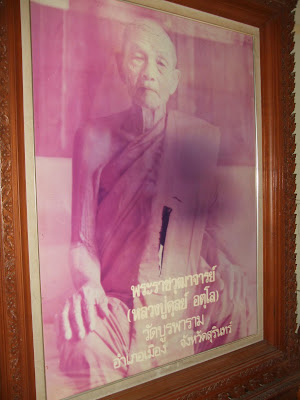 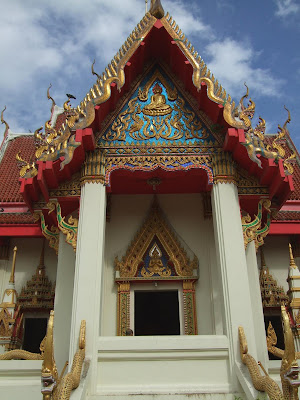 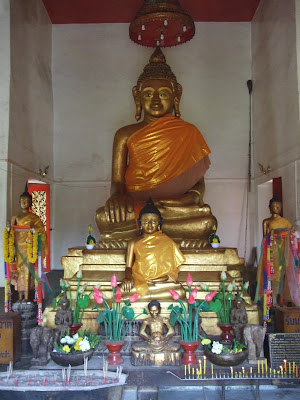 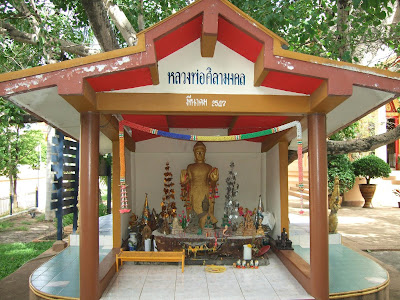 A shrine to LP Sila Mongkon, a Monday Buddha image. 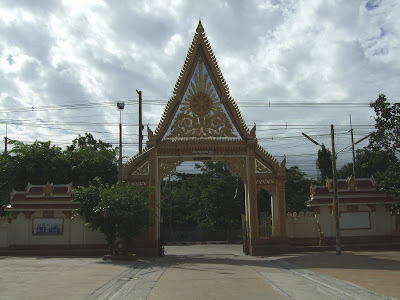 A parting shot of the temple gate.
Posted by Wayne Woo at 11:44 PM 3 comments: 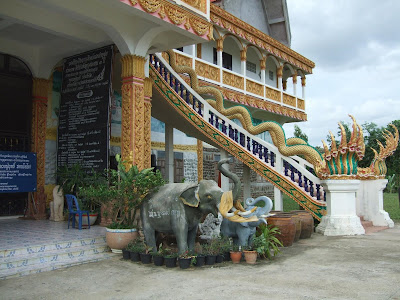 LP Rit was another famous master in Buri Ram who passed away in 2005 at the age of 89. He was a fellow disciple of LP Hong Wat Petburi who learn Khmer magical arts under the same master in Cambodia. Above is the entrance of the LP Rit Vihara. 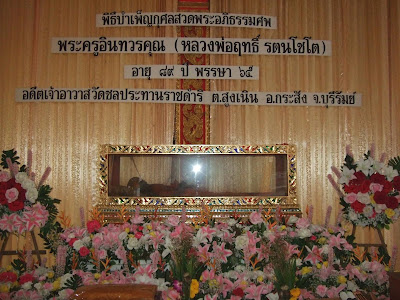 The body of LP Rit was still around in a glass casket for devotees to venerate. 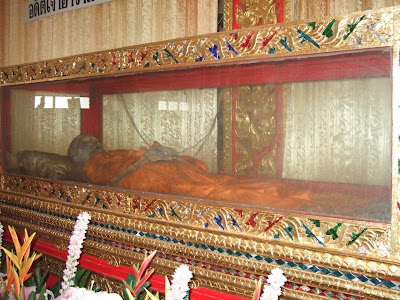 However, all that was left of LP was just his skeleton. Most of the flesh and skin had rotted away. 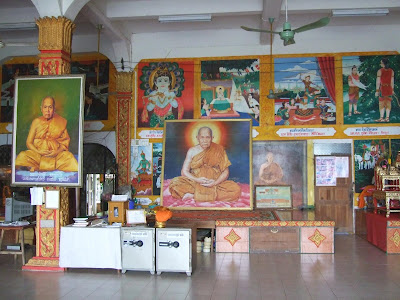 Portraits of LP Rit in the Vihara. The main shrine inside, with a Chinaraj Buddha in the centre.
A video I took of the courtyard outside before we left.
Posted by Wayne Woo at 12:00 AM No comments: 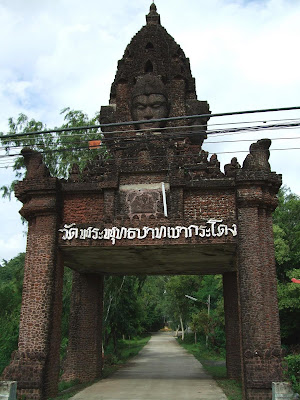 Wat Phra Puttabat Khao Kradong or Wat Khao Kradong in Buri Ram is the temple of LP Tiang, a famous master there. He has recently been invited to Singapore to meet followers. The temple is located at the foot of the Kradong hill. Above we see the Khmer style temple gate with the 4 faces of Phra Prom. 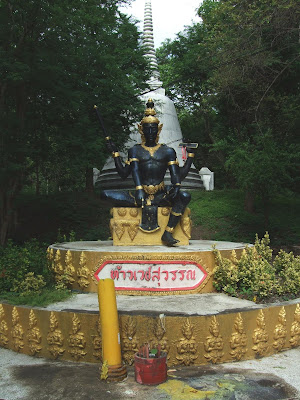 A special statue of Tao Wessuwan in Deva form with 4 arms, holding club, scripture, conch shell and one hand pointing to the ground. Normally he is portrayed in fierce Yakkha form protecting the entrances of temples. 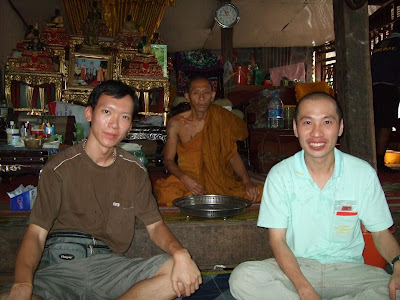 Inside LP Tiang's Kuti. As LP Tiang was not around, we got his disciple to give us a blessing for the items that we chowed. 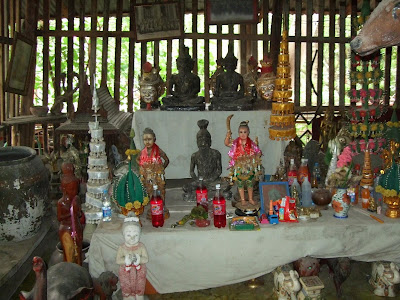 The altar inside the Kuti had many Lersi and Kumanthong statues. 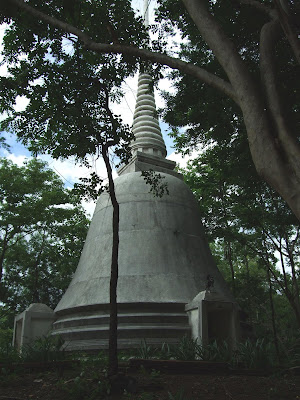 The white chedi outside. 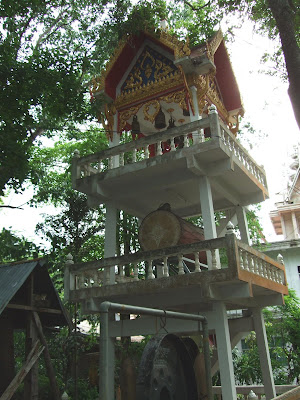 The bell and drum tower.

A video I shot of the Ubosot and Chedi. 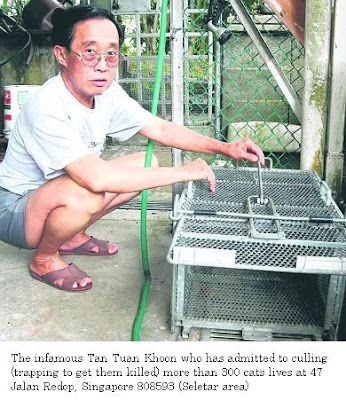 Today the Sunday Times reported a certain retired man named Tan Tuan Khoon, aged 62, who traps cats as a past time and sends them to the AVA to be put down. Naturally, he had become a most hated figure for all the animal welfare groups and animal lovers in Singapore. Tan is responsible for the deaths of more than 300 stray cats, as he lost count after 300.

What is more shocking than the fact that he enjoys having cats killed in a systematic manner is the kind of rhetoric that he uses to justify his evil deeds. He says that "trapping and putting down cats is actually the humane thing to do because stray cats generally have a shorter lifespan due to the hazards they face on the streets." That is no different from saying that the weak, the sick and the disadvantaged all deserve to die because they have a lower chance of survival than ordinary people. Stinks of Fascism, doesn't it? It is exactly this line of thinking that Hitler used to justify his genocide of the Jews, or what the Japanese Imperial Army used to brainwash their troops to justify the mass murders of Chinese civilians during WW2. Tan also says that he is "helping stray cats to end their suffering". So when he becomes sick and helpless in the future, I guess he also won't mind other people coming along and merrily put an end to his suffering?

Furthermore, it is so hypocritical for Tan to tell others he is being humane to cats when the truth is that he harbours a strong hatred towards cats for "defecating in his garden and driveway", "cats having kittens in the space between his roof and ceiling, causing the plywood ceiling boards to give way", and "also cats who chased his pet rabbit and stole his food" in the past. Just because a few cats offended him, he wants all the stray cats in Singapore to die for it? How foolish and dangerous is this man's anger! Does he not fear the heavy negative karma that he had accumulated thus far? His lifespan has been shortened and when the time comes for him to die, all those cats that Tan killed would come back to torment him, and to demand their lives back. I foresee a painful death and a woeful destination for him.

The Dhammapada says, "Hatred cannot be conquered with hatred, but only with Metta (loving-kindness) can hatred be conquered." My master LP Jaran once told the story of old Madam Ping, who used to be a helper at Wat Ampawan. Madam Ping also had to deal with the cats defecating in the wrong places. She was very angry with them as she had to clean up their mess. So she used to curse them loudly and hit them with brooms and stuff whenever she sees them wondering into the temple dwellings. This caused the cats to be even more misbehaved. Those cats that were mistreated by Ping got their other cat friends to take revenge by defecating all over the place, making worse messes than before. Ping was at a lost to what to do, when LP learned of this and advised her to apologise to the cats instead. She was told to kindly ask the cats to stop defecating all over the place and offer them food in exchange for their good behaviour. Madam Ping did not quite believe in LP's advice, but she went ahead to try as she did not know what else to do. True enough, the cats accepted her apology and offer of peace. From then on all the cats and even dogs of Wat Ampawan know how to go to the river bank to defecate, rather than defecating on the temple grounds. Even the new animals that come to the temple were told by the older residents not to misbehave. This proved that animals are intelligent and can appreciate kindness. All beings want to be treated with kindness, and none likes to be scolded, beaten or even killed. If a person cultivates Metta towards all beings, he or she will be respected by even fierce beasts like tigers and crocodiles. What more for cats and dogs?

Therefore my advice to Mr Tan is give up your cruelty towards cats right away. Lay down the butcher's knife and repent while you still can. Otherwise after you breathe your last, nobody can save you when your stand before King Yama in the halls of hell, with all the cats that you killed on one side demanding that for you to be punished for your sins. 苦海无边, 回头是岸! Take heed, before it is too late.
Posted by Wayne Woo at 3:46 PM 6 comments: 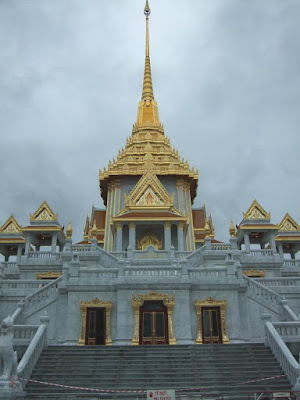 The Phra Maha Mondop building at Wat Traimit in Yaowarat, Bangkok has recently been completed. The sacred Gold Buddha Phra Sukhothai Traimit (also known at Phra Maha Suwan Patimakorn) has also been moved into the Mondop. However it is still not open to the public yet. 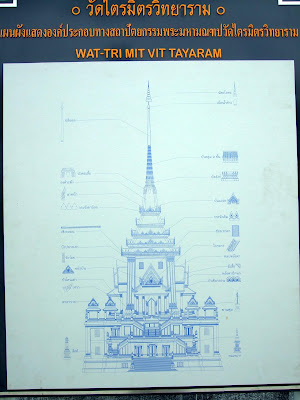 The building plan of the Mondop. It should be officially open by the end of the year. 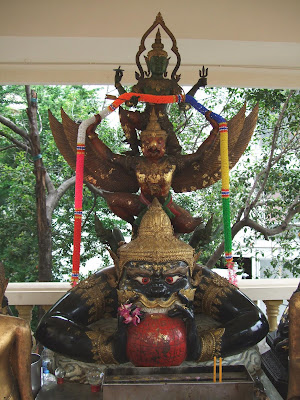 The Phra Narai Song Krut and Rahu statue outside of the old Vihara housing the Gold Buddha.
Posted by Wayne Woo at 12:11 AM 2 comments: 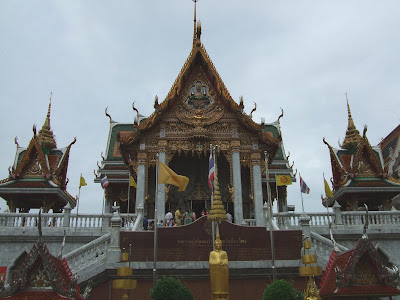 Wat Hualampong is the temple near to Hualampong train station. It is very beautiful due to the large number of Thai Chinese donors who contributed to its building. Above we see the Ubosot. 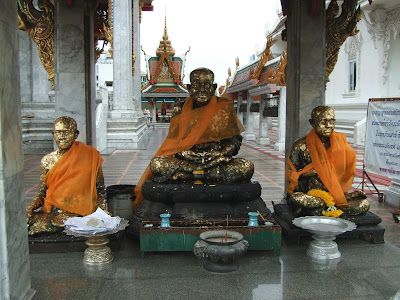 A LP Tuad shrine at the side. 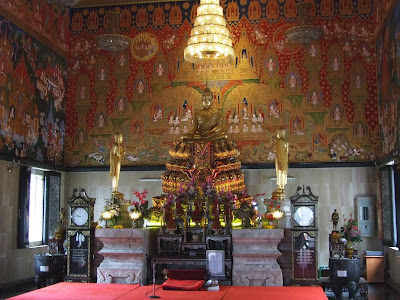 A video of the murals inside the Ubosot.

The Extravagant Kassa of CEO Yongxin 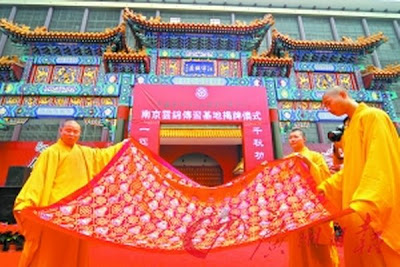 I read with interest that the Shaolin CEO Yongxin "ordered" an extravagant Yun Jin kassa robe to be made in Nanjing, and it was completed a couple of days ago. This luxurious work of art costs 160,000 RMB. Just the gold thread used alone costs 50,000. The jade and gold buckle cost another 30,000 perhaps. The rest is the high quality silk as well as the intricate embroidery of various auspicious symbols on the kassa itself. Yun Jin artisans had been famous for making Imperial robes and prized kassa since the Six Dynasties Era (420-589 CE).

This of course caused an uproar among Chinese netziens, but when queried Yongxin replied that he did not order the Kassa, but it was an offering made by Yun Jin to him. This precious kassa was not for his own use, but was to be displayed in the soon to be built Shaolin museum for research purposes. Reporters checked with Yun Jin and they also said the same thing.

So, what's the point of it all? The Diamond Sutra says, "Even if a person were to fill the whole universe with the 7 precious gems and use them for charity, it still could not compare to another person who could understand 1 gatha from this Sutra and explain it to others." The donor(s) is wrong to donate such a useless gift to a monk and the receiver is also wrong to receive it as this would only invite criticism from the lay people.

Regarding accepting this kind of offerings there is a Zen koan to illustrate the correct mindset a monastic should have. In the past after Dongshan's disciple Yunju had an initial awakening, he built a kuti in Sanfeng mountain to continue his cultivation. For days he did not go back to the temple to have his meal. So Dongshan sent for him and asked,
"Why have you not come to have your meal recently?"
Yunju replied, "When I'm meditating in my kuti, a Deva comes to offer me food everyday."
Dongshan was not too pleased and said, "I thought you were a very sharp student! Why do you harbour such views and conduct? Come to my chamber tonight, I want to talk to you."
So that night Yunju went to Dongshan's chamber to see him. Dongshan shouted,
"Yunju!"
"Here I am."
"Not to think of good, not to think of evil; what does this verse (from the Platform Sutra) mean?"
Yunju did not say anything, but when he went back to his kuti, his mind became very still and he entered into a deep state of cessation. From then on the Deva could no longer see him and thus after 3 days did not appear any more.

If one is devoted in seeking the Dharma, one should not even be moved by sublime offerings from the Devas; what more for mundane offerings from Men? This is the true meaning of renunciation and all monastics should do well to ponder this teaching whenever anybody makes special offerings to them.
Posted by Wayne Woo at 1:51 AM 2 comments: