What is the 8th Consciousness? The 8th consciousness is a concept taught in the doctrine of the Yogacara school of Mahayana Buddhism. They enumerate the 5 senses, supplemented by the mind, the defilement of the mind (klesha), and finally the fundamental store consciousness (ālaya vijñāna), which is the basis of the other 7. This concept is not taught in the Theravada. One could think of it as a field that stores all the seeds of your good & bad karma from all your past lives until the present life. It is the most subtle core of the being that we believe to be our "self".
So what can we do about this alaya vinnana? One cannot reach it in the normal state of consciousness. You can only reach it by deep meditation until the formless jhanas. The 4 formless jhanas are none other than the 4 aggregates of the mind focused at a single point. The jhana of infinite space corresponds to a universal "feeling" of emptiness. The jhana of infinite consciousness corresponds to "cognition" expanded outwards. The jhana of nothingness corresponds to "mental formations" coming to a temporary halt, and the jhana of neither perception nor non-perception corresponds to "perception" being unable to identify itself. The mind appears to be infinitely empty and unmoving in those states, deceiving many undiscerning meditators to believe they have attained Nibbana; but in reality it still contains very subtle seeds of defilement called Avijja (fundamental ignorance). This is what is meant by a field or store. Once they receive the right stimulus (external conditions) they will develop into the plants of either lobha (likes), dosa (dislikes) & moha (unawareness).
Therefore Jhana by itself is useless if one does not use Vipassana to reflect on the nature of those states of mind. It is through constant mindfulness of aniccam, dukkham & anattam leading to dispassion that gives one the wisdom to destroy the seeds of Avijja and reach Nibbana. Once that is achieved, the field transforms into a bright mirror - everything can be reflected in it but nothing ever sticks on to it. The alaya vinnana is gone forever and what is left is only the Bodhicitta - the awakened mind.
As Chan Master Dazhu Huihai taught in his treatise, the 8 consciousnesses are transformed into the 4 Buddha Wisdoms. The eyes, ears, nose, tongue and body - these 5 consciousnesses together become Accomplishing Wisdom. The 6th consciousness of the mind alone becomes Observing Wisdom. The 7th consciousness alone becomes Equanimous Wisdom and the 8th consciousness alone becomes Perfect Mirror Wisdom.
How do these 4 Buddha Wisdoms apply to our awakened mind? Ven Dazhu further taught that when the mind is deep and still like the void, bright and completely motionless - this describes Perfect Mirror Wisdom. When no sense object can cause a single thought of like or dislike to arise, then duality is void. This voidness of duality is Equanimous Wisdom. When all the sense organs can discriminate clearly in their respective realms, but no confused thought arises to hinder the freedom of the mind - this is Observing Wisdom. When all the sense organs can be used at the appropriate time, in a correct way with no discrimination of form -- this is Accomplishing Wisdom.
And how do the 4 Buddha Wisdoms relate to the 3 Bodies (Trikaya) of the Buddha? The Perfect Mirror Wisdom becomes the Dharmakaya (Reality Body). The Equanimous Wisdom becomes the Sambhogakaya (Reward Body). However, Observing Wisdom and Accomplishing Wisdom combine to become the Nirmanakaya (Emanation Body). These 3 Bodies are set up as names and differentiated as concepts only as an expedient means to help those who do not yet understand the Dharma. If one readily understands this doctrine, the expedient means of the 3 Bodies is not necessary. Why is that? Because one clearly comprehends that their nature are formless, being established only from the fundamental non-abiding mind, which also does not exist.
So practice Samatha-Vipassana meditation earnestly, until one can vanquish Avijja and transform the Alaya Vinnana into Perfect Mirror Wisdom or Dharmakaya. Then you will know for yourself what the Buddha has taught. This is the path taken by all Noble Ones.
Posted by Wayne Woo at 12:09 AM 1 comment: 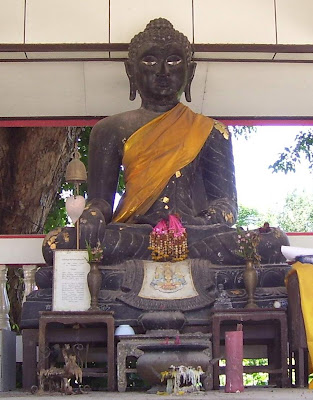 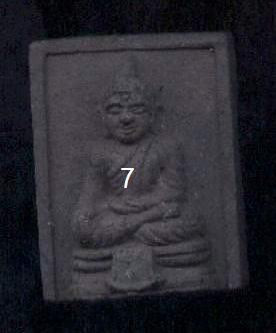 To celebrate the 50th year of His Majesty King Bhumipol’s reign, Thai people are honored to build Buddha images to offer to the King as gifts of great value. The first of two Buddha images is copied from the Black Buddha Image in Nalanda University in Rajagriha, India. This is
Luang Por Ong Dam. The second is the Kind Buddha Image, known as Luang Por Metta, and is described below.

In 1993 a party of Thai pilgrims travelled to important Buddhist sites in India, and they were very impressed by the Black Buddha Image. They took a model of the image to make a copy in Thailand. Now 12 Buddha images have been constructed and these have been distributed to three sites: Udon Thani, Sakhon Nakhon, and Nongbua Lamphu provinces. The holy ceremony celebrating these Buddha images was held on the 3rd of October 1993. The Buddha Image Building Committee also published the history of the Black Buddha Image, as well as texts on the 32 Maha Burislaksana (The 32 Appearances of the Great Man), and on the 80 Adidtayanupayanchana of the Lord Buddha. These books are guides to the process of constructing Buddha images. 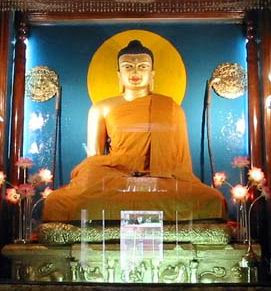 In 1994 Phra Kru Pawana Jitsunthon the abbot of Wat Aranyigavas in Ban Peu, Udon Thani, made a pilgrimage to India and visited Wat Thai Buddhakhaya (Mahabodhi Temple in Bodhigaya), the place where the Lord Buddha attained enlightenment. He paid respect to the 60 inch-wide Buddha image called “The Kind Buddha” and he brought a model of this Buddha image back to Thailand in order to make a copy. 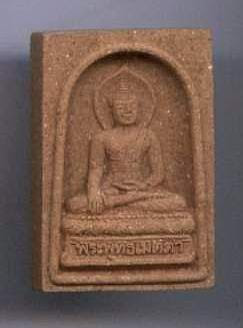 The image enshrined in the Mahabodhi Temple was considered especially wonderous. Its height of more than 2 metres makes it the largest surviving seated Buddha image created using black stone, painted in gold by the pilgrims. The gilded image of the Buddha seated cross-legged, with one hand pointing to the earth, i.e. in the posture of the Bhumisparsa Mudra in which the Buddha sat when he attained enlightenment. This sculptural representation of the Buddha is unique with its calm facial expression and superb physical beauty. All the pilgrims from all over the world offer prayers at the feet of the large image of the Buddha installed in the ground floor of the Maha Vihara facing east. Its great size may indicate that it once served as the central image of the Mahabodhi Temple.