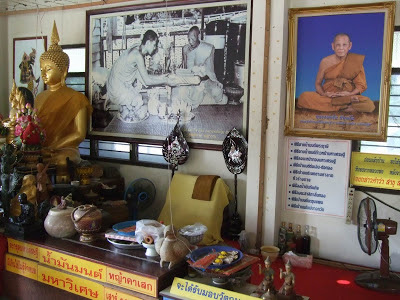 LP Jeud of Wat Po Setthi in Nakhon Pathom province is a famous guru monk best known for his wealth hornet amulets. However I did not get to meet him when I visited this temple. Above we see the platform in the main Sala where he normally blesses devotees. 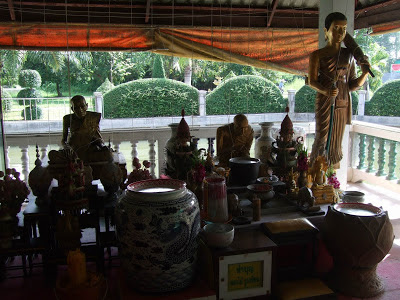 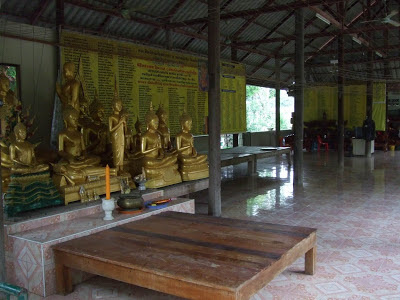 Buddha statues in the side Sala. 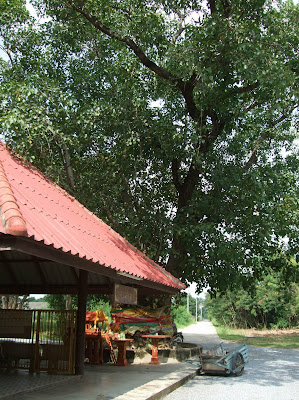 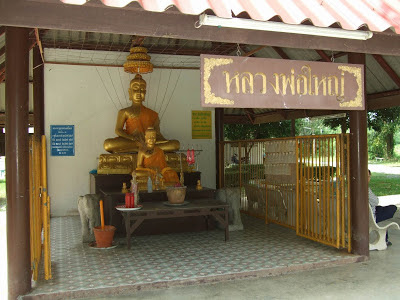 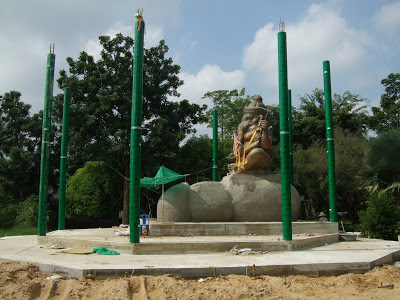 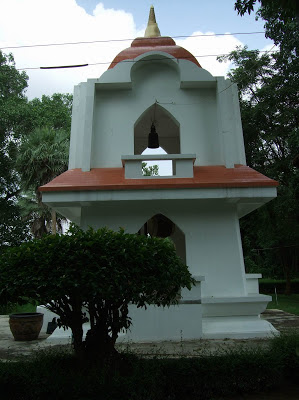 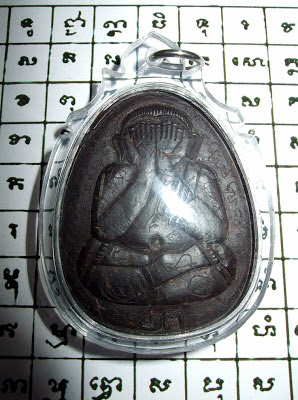 Phra Pidta carved from coconut husk, with many takruts embedded behind. 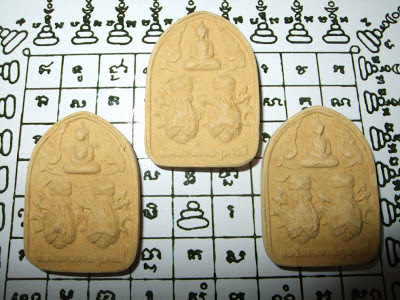 Somdej riding twin hornets, with 2 takruts behind.
Posted by Wayne Woo at 3:00 AM 5 comments: 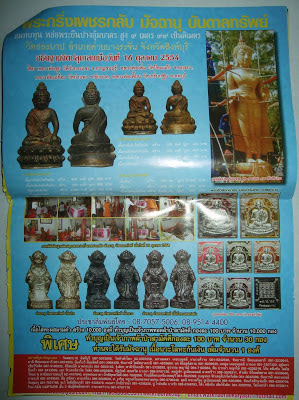 Wat Salapap in Singburi province recently came out with a batch of Kring, Sivali and Hanuman amulets to gather funds for building up the temple. They invited famous monks like LP Perm Wat Pom Kaew and LP Pian Wat Kren Kathin to consecrate the amulets. 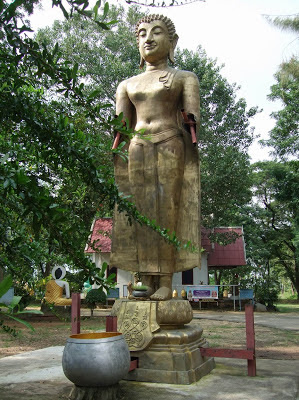 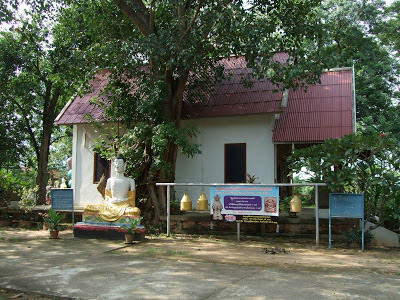 The office bulding where the temple counter is. 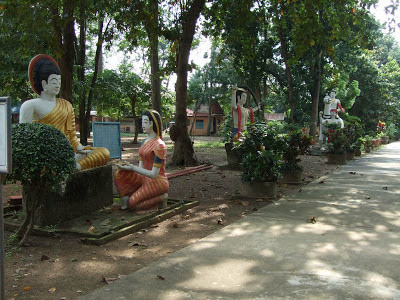 Statues in the park depicting scenes from Lord Buddha's life. 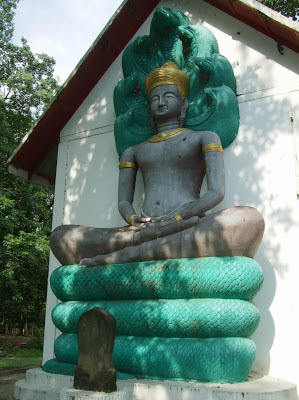 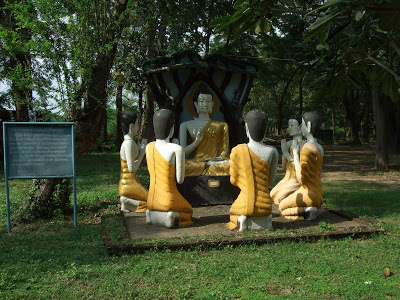 Lord Buddha and the first five disciples.
Posted by Wayne Woo at 2:44 AM No comments:

HK cop gets into trouble for selling Lukkok online 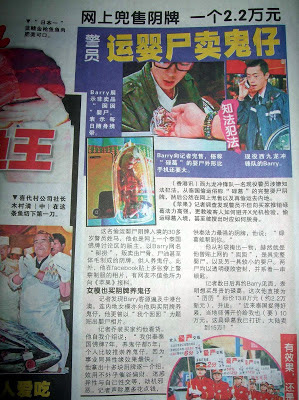 "Truly, an evil deed committed does not immediately bear fruit,
like milk that does not turn sour all at once.
But smoldering, it follows the fool,
like fire covered by ashes." - Dhammapada

I just read an article in Shin Min papers today regarding a HK riot cop "Mr Ma" who got exposed by the paparazzi for smuggling Lukkok (dead baby fetus) from Thailand into Hong Kong and selling them online. Apparently he owns an occult amulet forum there and goes by the nick of "Barry". Barry boasts of having customers from China, HK, Taiwan and Macau who chow his Thai occult amulets.

He also claimed that his personal female Lukkok "Lui Lui", which he tried to sell the reporter, could fetch a whopping 150,000 HKD if sold in China (mentioned in the video). But now that Barry is going to face disciplinary action and criminal charges for his sideline, can the Lukkok save his skin? This reminds me of the recent case of the Taiwanese guy who was arrested in Bangkok by Thai police for also trying to smuggle a number of Lukkoks back to Taiwan. 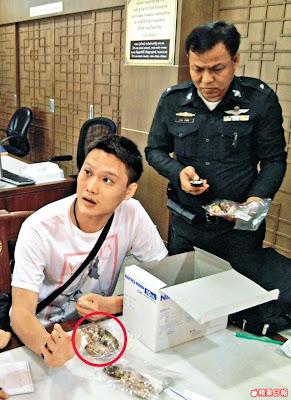 Why is it that guys from HK and Taiwan so fascinated by this aspect of Thai occultism? Is it because of the fast results of attraction and side wealth that they claim it brings? Or is it because of the lucrative, sometimes ridiculous profits that it brings when they resell it to the ignorant rich back in their country? Either way, they probably don't realize it does more harm than good to both the seller and buyer. 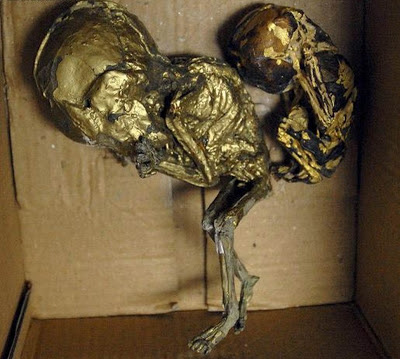 Lukkoks, unlike Kumanthongs (people usually mix them up), are mostly created with black magic from real baby fetuses to serve a selfish purpose. As such they are not bound by any Buddhist precepts and are very volatile. These baby spirits can turn against their owners any time if they do not get the proper ritual offering or the required katha is not recited regularly to control them. And even if those requirements are met, long term usage of such occult items drains one Chi and life-force. Frankly the long term problems that it causes greatly outweighs the short term benefits that it brings (if it works). Although there are famous monks past and present who also create similar occult items for more positive purposes, it still takes a lot of Barami (spiritual cultivation) to make them work, because that is what these spirits feed on for their "power". In Barry's case, it probably did not work too well because a real effective Lukkok would have warned him that it was a setup by the reporter to trap him. Does that not teach something to those who are fascinated with getting such a thing?
Posted by Wayne Woo at 4:48 AM 4 comments: