No Toilets in Heaven

I was reading the "Fruit of Karma" book by Sudassa Onkom sometime ago and came across an interesting anecdote. In the story LP Jaran's disciple Phra Buayao was offered divine food by a certain Deva who admired the progress he has made in meditation. The food looked like ordinary food, but the taste was beyond anything that he could imagine. The amazing thing was Phra Buayao was the only one who could experience it - to other monks it just tasted normal. A small amount of it was enough to satisfy one's hunger. Puzzled, Phra Buayao asked LP Jaran about this and LP explained it to him accordingly, as he too has been offered divine food by this Deva as well. LP mentioned that the food and drink of the Devas are so refined that they are completely absorbed by the body. Ordinary food and drink are only partially absorbed by our bodies and the rest comes out as waste matter. But for Deva food, it produces no waste matter at all. Thus the Devas have no need to urinate or defecate and there are no toilets to be found in the heavenly realms.

Furthermore, Deva bodies are very subtle and they do not sweat, accumulate dirt and become smelly like our gross bodies. The only time Devas sweat and become smelly are when they are about to die - one of the five major signs of decay. Otherwise they are always clean, radiant and good smelling. The clothes of the Devas are also always clean and pure, and their beauty depends on the merits that they have accumulated when they were humans. Because of this Devas do not need bathrooms as well, since there is no need for them to wash their bodies clean daily. As such, the heavens are places of perpetual purity and cleanness, as opposed to the hells, which are places of extreme impurity and suffering. That's why there's truth to the saying that "cleanliness is next to godliness". The Buddha himself placed great emphasis on hygiene and cleanliness, instructing the monks to bathe and brush their teeth daily. Hair and beard should also be shaved on a regular basis to maintain a neat appearance. He criticized those ascetics who made themselves naked and dirty in order to be holy as being foolish. So there's no question to how the Buddha perceived the merits of cleanliness.

Why is this so? Because the Buddha's teaching is about purifying one's mind, and keeping one's body clean has an undeniably positive effect on the mind. Toilets are places where we get rid of the filth and waste matter in our bodies and thus keeping toilets clean is also an act of great merit. I once heard another saying which goes, "If you want to know how civilized a country is, simply look at their toilets." Come to think of it, this is quite true. A good example would be Japan and its generally clean public toilets. This is directly linked to the refined and orderly manner which Japanese people conduct themselves in public. LP Jaran also taught that there's great merit to be gained from building public toilets and keeping toilets clean. He said that if parents want their children to grow up and become successful people, they should instill in them the merits of cleanliness and make them clean the toilet or bathroom regularly. Think about it; there's profound meaning to this teaching. If we can develop it into a habit and apply it to the mind, it will surely lead us to the end of suffering. 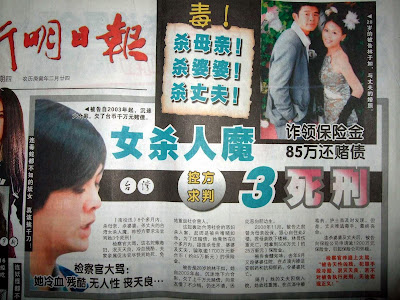 Last week there was an article in Shinmin paper talking about a Taiwanese woman named Lin Yuru, who successively murdered her own mother, mother in law and husband in order to use their insurance money to pay off her gambling debts. Lin, aged 28, was addicted to betting on underground lottery since 2003. As a result she chalked up huge gambling debts totalling many millions of yuan. In 2008 she murdered her mother by pushing her down a flight of steps, gaining around 5 million yuan from a prior accident insurance policy. In the following year, she poisoned her mother in law while she was warded in hospital and in the next month used the same tactic on her husband, causing both of their deaths. Her wicked deeds were only revealed when she applied to receive 12 million yuan from the insurance company, arousing their suspicions. The company called the cops on her, prompting them to investigate this case and discover her crimes. Currently, being charged in court for the triple murders, the prosecutor is appealing for the judge to pass 3 death sentences on Lin. He rightfully reprimanded her for being inhuman, wicked and devoid of all conscience.
This woman reminded me of characters like Devadatta and Lady Cinca, who committed heinous sins during the Buddha's time and fell into Avici Hell alive. That was because the Earth was no longer able to bear the weight of their evil deeds and had to open up and swallow them. Even so, by killing her own mother and mother in law, Lin Yuru has committed 2 anantarika-karma and is thus destined to follow in the footsteps of those infamous ones. Furthermore there is the additional sin of killing her husband as well. Although she is still alive, her mind has already fallen into Avici Hell the moment she devised those wicked plans to murder her dear ones out of greed. In this case, greed is the defilement that has led her into the deepest hell. The minds of those who have committed the heinous sins can never find a single moment of peace while they are alive, nor will they be able to find a moment of respite after they die. This is the meaning of "Avici" - without intermission. They will suffer that way for an unimaginably long time, until all their evil karma is exhausted. Woeful indeed are the consequences of not keeping craving and greed in the mind under restraint. We must all take heed from such negative examples.
Posted by Wayne Woo at 10:23 PM 3 comments:

"The water basin of the pure mind reflects clearly every moment;

But the broken basin that is the turbid mind of sentient beings,

Cannot reflect the Dharmakaya of the Tathagata."

Currently, the Southwestern region of China is being hit by the worst drought in 60 yrs; and forecasters see no sign of it abating soon. The people in the provinces of Yunnan and Guizhou are affected most badly by this drought, suffering greatly from the severe water shortage. Although the Chinese government tries to use modern technology to create artificial rain, the effect of such measures cannot really do much to solve the problem.

What are the causes of such a disaster? Normal droughts are the result of natural climate cycles, but great droughts of such a severe scale are a result of collective karma. Let me cite a story - during the Han dynasty, there was a filial widow, who continued to take care of her mother in law with devotion even after her husband passed away. But later when the mother in law died, the widow's sister in law wrongly accused her of murdering their mother. They went to the magistrate and the widow protested her innocence. Unfortunately, the magistrate did not believe her and sentenced her to death. After she died, her spirit went up to the Heavenly Emperor to complain of the gross injustice. As a result of this injustice, the entire province experienced a great drought for 3 yrs, causing many people and animals to die. It was only after a virtuous official righted this wrong before the new magistrate and proclaimed it before the widow's grave that the drought finally ended with a huge downpour.

So as we can see, severe climate disasters in a region are usually a result of an unwholesome deed of deeds committed by the people living there. In order to expiate this type of negative karma, the Chinese Sangha of that region should meet and chant the Avatamsaka Sutra together. The merits of this mass chanting should be dedicated to all the aggrieved parties and suffering sentient beings. When they received these merits, their anger will be appeased and the drought will automatically be lifted. Therefore out of compassion for all sentient beings, I hope the respected Sangha leaders will come out to perform this great puja as soon as possible.