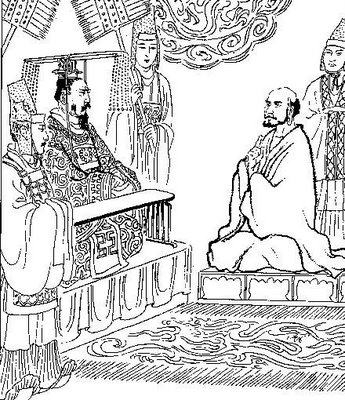 Dana is the first & most important of the Paramitas. But what is the true value of Dana or Giving? We have all heard the story of Emperor Liang Wudi asking Bodhidharma that since he had performed lots of charity, like for example, building monasteries for monks and nuns, & many orphanages, etc. whether he had gained a lot of merit by doing so. Bodhidharma, being an enlightened and straightforward master, bluntly told the emperor that he had no merit at all. The Emperor was quite unhappy with what he heard. He continued to ask Bodhidharma about the meaning of the Noble Truths, & who Bodhidharma really was, but again his answers were completely beyond the Emperor's limited understanding. So he refused to talk to him any further & sent him away. Bodhidharma then left the palace, heading north to the Wei kingdom. He eventually settled down in the Shaolin Temple.

All Wudi had created with his good deeds was only worldy merit, for he had performed them with a deluded mind. Worldy merit, was according to Bodhidharma:

"Small fruits of human & deva realms,
Grown from seeds with remainder;
Like a shadow that follow its from,
Which although exists but it unreal."

If one clings to the concept of Dana - whether it is a person giving, object given or person receiving, then whatever merit one gains is illusionary, leading one to temporary happiness but suffering in the end. It does not matter whether you expect anything in return or not.

True merit is only attained when you see in your mind that there is no giver, no object, no receiver & therefore no merit gained whatsoever. In other words, it is transcendal merit. As Bodhidharma described:

With an intrinsically empty body;

Such a kind of merit,

Cannot be gained by worldly means."

We all know that before you can realize the unconditioned reality of Nibbana, you do need all sorts of worldly good deeds & practices to help you towards that goal. Whether it is the Theravada or other Mahayana schools, they all share the same ideology. Even Shen Xiu, Hui Neng's compatriot under the 5th patriach also teach in the same manner. That's why he once said that:

"To refrain from all evil is Sila,

To cultivate all good is Prajna;

To purify one's mind is Samadhi."

Very standard Dhamma practice. Great. But why can't people attain Buddhahood following this teaching? The problem lies with the nature of sentient beings, which grasps on to everything, getting stuck to whatever they are doing & become unable to progress. That's where the unconventional Chan teaching comes in. Chan pulls the mat out from under you, completely taking out the root of grasping within you - your own mind. Every teaching of Chan does not deviate from this spirit. Thus Hui Neng replied to Shen Xiu's katha saying:

"Not to think in a wrong way is Sila,

Not to think in an ignorant way is Prajna,

Not to think in a confused way is Samadhi;

Whether coming or going it never leaves Samaya."

This gatha teaches us not to think in a way which is not in accordance with the emptiness of the mind, which leads to grasping & consequently stagnation. It is no different from Bodhidharma's teaching to Emperor Liang Wudi. Therefore the Dana practiced by a Chan practitioner is not the same as the Dana practiced by those from other schools.

After all being said, I want to clarify that I'm not asking anybody to follow the Chan school, but I just found it appropriate to state the Chan position on Dana & worldy merit since I practice Chan. The reader can then compare this to his or her own understanding of this subject & come to your own conclusions. To end this posting I'd like to tell another short Zen koan abt the Layman Pang:

After Layman Pang attained enlightenment, he took all his wealth, put them on a boat & sailed it out to sea. He then let all of it sink to the bottom of the sea. When he returned to land, somebody asked him:

"Why did you let all that wealth go to waste? Why not use it for Dana?"

To this Pang replied:

"No way! Dana was precisely the cause of my suffering for too many past lives!"

Can you now understand why Layman Pang said that? 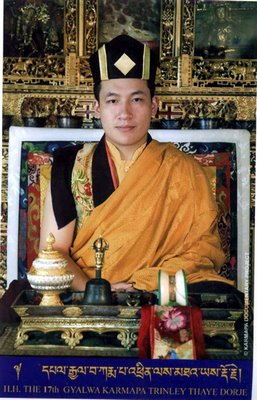 After a period of 7 years, HH the 17th Gyalwa Karmapa, Trinley Thaye Dorje returns to Singapore to propagate the Dharma on 7-10-2006. For the uninitiated, he is the spiritual leader of the Kagyud school of Tibetan Buddhism, who is among the top most influential figures in Tibet. However, the Kagyuds have never been involved in the political rule of the Land of Snows, unlike the other schools like Gelugpa or Sakya. The Kagyud lineage focuses on the practice of Mahamudra meditation, which is descended from great yogis like Tilopa & Naropa from India, to Marpa, Milarepa & Gampopa in Tibet. It is also called the "Black Hat" school because all the Karmapas, from the first one (Dusum Khyenpa 1110-1193) to the current one, wear a ceremonial black hat as proof of their lineage. Some of you may know that at this time there are 2 Karmapas, the other one being Urgyen Trinley Dorje. Although there are disputes among the followers as to who is the true Karmapa, I believe that as long as they share the same devotion to teaching & compassion for all beings, both are worthy of the highest respect. 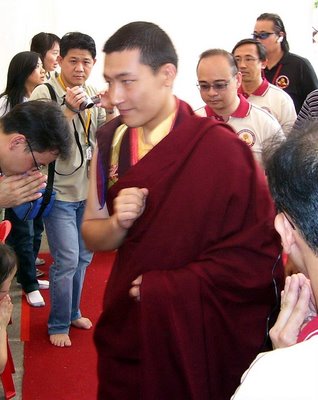 Here we see the Karmapa arriving at the Karma Kagyud Buddhist Centre in Singapore, being welcomed by many local & foreign devotees. It is a rare opportunity to meet the Karmapa, who has been reincarnated so many times to help sentient beings. On this occasion (8-10-2006) he conducted the taking of the 3 Refuges as well as the Bodhisattva vow ceremonies. After a discourse on the meaning of the refuges & the why we must arouse our Bodhicitta (the resolution to seek Buddhahood) in fluent English, he began the Tibetan chanting, leading the devotees to repeat after him. 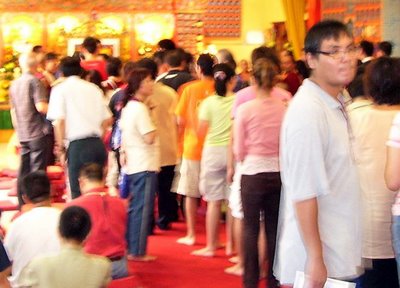 When the chanting is over, all the devotees started to queue up in a typical Singaporean fashion to be blessed by the Karmapa. Each of the devotees, local & foreign alike have a little of their hair cut to symbolize the abandonment of defilements & doubt in the Triple Gems. 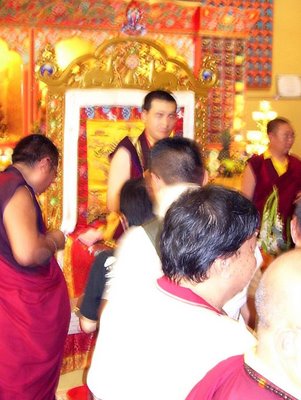 Here we see the Karmapa sitting upon his throne to touch the head of every devotee as a way of blessing. It was tiring for him due to the large numbers of devotees, but the unwavering compassion for all beings is what drives this Bodhisattva on. I also witnessed that one lady brought her dog into the hall to be blessed by the Karmapa as well! But he did not turn her down because it was an animal, which shows his equanimity for all sentient beings is genuine. 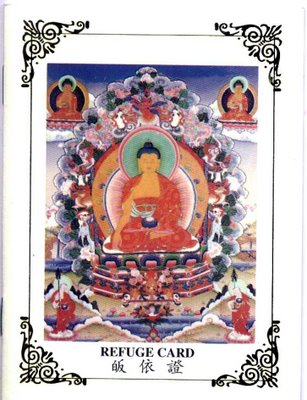 This is the new refuge card given to those who have taken refuge on this day. Although I have taken them before 9 years ago under this school, I decided to have them renewed again since the Karmapa is here in Singapore. So my Dharma name has been changed from Migyur Dorje (Unchangable Vajra) to Konchog Tendar (Flourishing Dharma). A joyous occasion it was! Over the next few days the Karmapa will conduct various initiation & empowerment ceremonies for deities like Red Chenrezig, Medicine Buddha & Amitayus Buddha. May all beings who have the good karma to be present, who accept & practice his teachings attain Enlightenment in one lifetime, sadhu.

The Haunting of Suvarnabhumi Airport 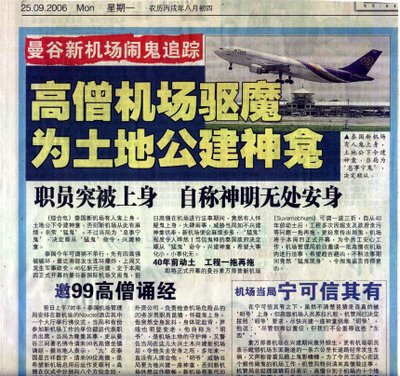 Last week there was a report on the new airport in Bangkok, Suvarnabhumi being seriously haunted. Since they started to build this airport 4 decades ago, the construction had been delayed time & time again by lack of funds or corruption scandals. There were also reports of hauntings & unexplained accidents which further undermined the urgency to get this airport up & going. Some airport workers also said that the 6 km stretch of road on the east side of the airport was very accident prone because drivers saw ghosts wandering on the road at night.

So on 23rd Sep 2006, 5 days before the official opening, the airport authorities invited 99 monks from 3 famous temples in Bangkok to perform a chanting ceremony in 8 directions of the airport to pacify the spirits & pray for a smooth operation.

A strange event happened during the chanting. A 22 yr old worker named Khun Chai who was present at the ceremony started to tremble uncontrollably, after which he assumed a humped back form & spoke in an old man's voice. The spirit identified himself as "Poo Ming" (Poo means grandfather), who is the guardian deity of the land on which they built this airport. Poo Ming complained that all their construction work destroyed his home & they have ignored his existence for too long. He threatened to cause trouble for the authorities if they do not build a shrine for him to reside in. Khun Chai collapsed after delivering this message for Poo Ming.

Although the airport authorities find it unbelievable, but they still acceded to Poo Ming's request and built a shrine near the Novotel airport hotel for him. Besides the shrine to Poo Ming, they also set up & consecrated 1 Buddha image (called Phra Pathingma Suvarnabhumi Sirichok) & 1 Phra Prom (4-faced Maha Brahma) image inside the Thai Airways office building for further protection & good luck.

But did everything go smoothly on the opening day (28th Oct)? Fortunately for them, other than a luggage belt cock-up, the airport operated without any major problems.

Real life is sometimes stranger than fiction. The moral of this story is to respect the land we live on, & also not to dismiss things we cannot see with our naked eye. Thus there is such a verse in the Atanatiya Paritta given by the 4 Heavenly Kings (recited for protection against evil spirits):

It means, "May the Buddhas who are peacemakers protect you always, so that you may be happy; being protected by them, may you be free from all dangers."

The key word here is "santikara" or peacemaker. Make peace with the earth we live on, make peace with the air that we breathe & the water which sustain our lives. Make peace with humans, animals, devas, spirits & all sentient beings. In this way you will find happiness & be protected from all dangers always.
Posted by Wayne Woo at 12:59 AM 1 comment: