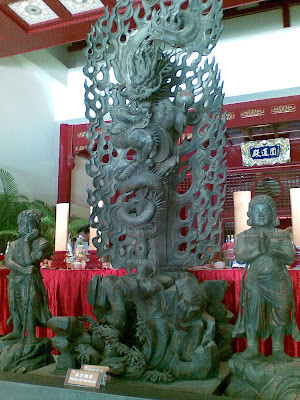 Those who have been to the Tooth Relic Temple in Chinatown recently would have seen the above sculpture at the back entrance, but not many know what it is. It is actually an Image of the Kulikar Naga Sword, a fearsome manifestation of Acala Natha, the Immovable One. On the left and right of the Sword are the 2 main servant boys of Acala, Kimkara and Cetaka. These 2 servants are Yakshas and also possess great power like their Master. 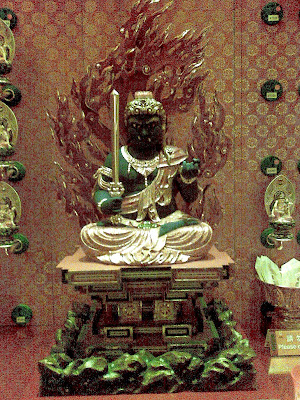 This is the classical Image of Acala with his Sword and Lasso, sitting in lotus posture on his throne of stone. There is an interesting story behind the Kulikar Naga Sword. According to the early tantric scriptures, once Acala was ordered by the Buddha to debate with 95 kinds of heretics. During the debate, Acala transformed himself into a flaming sword of wisdom to cut through their wrong views. But the heretics were stubborn and they too transformed into swords of wisdom to fight back. So Acala further transformed himself into the fierce Naga Kulikar, coiling around his sword. With its 4 powerful claws, it caught the surrounding swords of transformation and swallowed all of them into its belly. The heretics has no choice but to concede defeat. From then on, the Kulikar Naga Sword became a symbol of the invincible wisdom of the Dharma. This aspect of Esoteric Buddhism or Mikkyo is also deeply ingrained in classical Japanese culture, where the worship of Acala as an important Dharma protector is still quite popular. Some Yakuza gangsters take pride in having Acala or the Kulikar Naga Sword image tattooed on their backs, much like a symbol of invincibility. This is similar to the Thai Sak Yant (magic tattoos) culture, except that the former is more artistic than spiritual in nature. It is also interesting to note that the Tooth Relic Temple displays so many Mikkyo styled Images and Mandalas, when it is by no means a Mikkyo temple. Readers might want to take a closer look at them the next time you visit this temple.
Posted by Wayne Woo at 12:36 AM 2 comments: