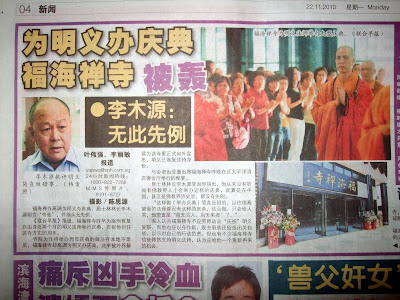 On Monday (22.11.10) there was an article on how the Foo Hai monastery held a grand ceremony recently to reinstate Ming Yi as their abbot, and also to commemorate his 20th year as the leader of that temple. This was followed by a big dinner at Pan Pacific Hotel. Most of the Buddhist community in Singapore felt this was very inappropriate as he had just been released from jail. Instead of keeping a low profile to repent on his moral errors, here the monastery is ironically putting him up on a pedestal once again.

Upasaka Li Muyuan, chairman of the Buddhist lodge rightly criticised that such behaviour was "an exaggeration" and unprecedented in the history of Buddhism. None the great masters of the past ever promoted themselves like that. In the Nirvana Sutra, the Buddha said,

"After I enter Nirvana, you should rely on the 4 Dharmas as your teacher."

What are the 4? Namely:
1) To rely on the doctrine and not the person
2) To rely on insight and not on knowledge
3) To rely on the meaning and not the words
4) To rely on the transcendal meaning and not the conventional meaning
I
The wise know thoroughly the danger of feeding the ego and thus avoid such ceremonies which serve no purpose at all. Instead of relying on the good doctrine as their teacher, the fans and followers of Ming Yi continue to rely on him for "guidance". He cannot even guide himself.. how can he guide others? It is pitiful indeed, that Ming Yi makes one mistake after another, which will compel him to embark on a path of no return. He is not worthy of the Sangha robe that he clings so dearly to.
Posted by Wayne Woo at 1:53 AM 3 comments:

Questions & Answers on the Netherworld III

The following is an interview of Mr Li Shu by his good friend Lin You Xiang. It is called "幽冥问答录" in Chinese. Mr Li had worked as a Judge in the Netherworld in the beginning of the previous century, and wished to share his experiences with his close friends. This interview was written down many decades ago and gives a very detailed, first-hand account of life in the ghost realm.

Q41: Between ghosts and humans, whose numbers are greater? Humans are afraid of ghosts, are ghosts also afraid of humans?

A: The number of ghosts in the netherworld are more than humans. Coming and going, here, there and everywhere. Humans walk in the middle of a path, ghosts walk at the sides. Humans like to walk in the light, ghosts like to walk in the dark. Ghosts are also afraid of humans; they usually move away when they see humans approaching. If the person is a righteous gentleman, ghosts will also respect him. Those people harassed by ghosts are usually of crooked character or down on luck. As such from the afternoon till the night, try to avoid walking at the sides of a path or where it is dark. When going out at night, don't walk so fast or cough a few times to let the ghosts know you are approaching. If you accidentally bump into them, you will feel a sudden chill. When Yin and Yang energy clash, both will feel uncomfortable as a result.

Q42: Is there a difference in how ghosts walk as compared to humans?

A: The feet of ghosts can't be clearly seen. It is as if they were walking in smoke. They move much faster than humans.

Q43: Why are ghosts afraid of roosters crowing?

A: Because that means that sunlight is coming soon and they have to hide. This is similar to humans avoiding the heat emitting from an oven. However for ghosts who have virtue and merit, they won't be afraid of sunlight.

Q44: Sir, your past karma must be quite exceptional and different from ordinary people. Will you be freed from the wheel of rebirth in the future?

A: It's easier said then done. I cannot avoid it even in my next life. I asked my "colleagues" to check my future destination for me and they told me I will be reborn in the Nanyang district of Henan province. However decades have passed since then and I know not whether there are any changes.

Q45: Do the officials in the netherworld get reborn also?

A: Of course. Like those officers in the civil service who find it easier to switch to a better job than ordinary people due to their positions, the netherworld officials are no different.

A: Both scenarios can also happen.*

*If according to the Buddhist scriptures, the consciousness to be reborn is drawn into the new being at the moment of conception.

Q47: Since there are so many ghosts staying indefinitely in the netherworld, why don't they seek to be released from that state ASAP?

A: Because there are more ghosts than humans and thus there is not enough supply to meet the demand. Furthermore the family which the ghost will be reborn into must have some past affinity with each other; otherwise it won't work out. If the ghost had a wide social circle when he was alive, then he would find it much easier to be reborn. But if he was a poor person who remained in his hometown his whole life, knowing very few people, then it would be very difficult. This kind of ghosts would have to wait very long to find a family that may have some affinity with him.

Q48: Of the 3 main (Chinese) religions of Buddhism, Taoism and Confucianism, which is most respected in the netherworld?

A: They respect all 3. However Buddhism is the most revered.

A: Also in the celestial realms. They won't just disappear.

Q50: Why did you give up on being a judge later?

A: I didn't want to do it on the long term, and had asked to resign several times; but they did not approve it everytime. Later I was taught by a colleague to recite the Diamond Sutra. I followed his instruction and after I finished reciting the Sutra for 2,000 times, I was no longer drawn to the netherworld.

Q51: Sir, are you able to see ghosts at normal times?

A: When I was a judge, I could see them all the time, no matter whether my consciousness was with my body or not. I started to see less of them after 1911 and after 1921 I stopped seeing them altogether.

Q52: How were you notified the first time you went to the netherworld?

A: One night I dreamt of a man in ancient attire visiting me and asking whether I could help him with some task. I replied, "What is it that you need me to help you with? I'm afriad I might not be capable enough to do it?" The person said, "As long as you agree, there is nothing you can't do." I did not know why he was here, but seeing that he was sincere and polite, I agreed tentatively. He appeared happy and told me he would come back to fetch me in a few days. Then I woke up and thought it was just a dream, so I did not think much of it. However after 4-5 days the person really came back and said, "Thank you for you cooperation. I have specially prepared a horse carriage to fetch you." I saw the carriage outside the door, so I hopped on. Later we arrived at some magistrate building and there I alighted there. The person brought me inside into a side room. After a while I was asked to preside over a court and pass judgement. A prisoner was brought before me and the jury officers related his case. When they asked me to sentence, I replied that I have never done this before and did not dare to pass judgement haphazardly. The officers said, "As long as you sincerely evaluate the evidence, you can make a decision according to your wish." I thought about it for a while and said, "Ok let's pass such a sentence." The officers agreed and asked me to sign on the judgement book. The prisoner was then taken away and I was taken back home using the same carriage.

Q53: Did your parents know about this then?

A: At first I kept it secret and did not dare tell anyone. But later my parents saw me alone in the reading room quite often and heard me talking to people, thus they gradually know what I was doing. After I became a netherworld judge, sometimes friends from there would come to visit me. However only I could see them and hear them talking. Others could only hear me talking.

Q54: When your ghostly friends came, did you have to prepare food for them?

A: A cup of tea was all the hospitality required.

Q55: Do they have holidays in the netherworld?

A: No different from the human world. During all the traditional festivals like Chinese New Year and Mid-autumn festival, we were given a few days off. However there was no Sunday rest day in the netherworld.

Q56: How come ghosts are able to shape-shift?

A: All ghosts have that ability, but they must be given approval by the netherworld authorities.

Q57: Have you judged any important cases?

A: They were all quite routine. There was hardly any case that was beyond reason. The sins were always obvious and the evidence clear cut. I've not come across complicated and hard to understand cases.

Q58: Have you toured around the netherworld?

A: They are only masks, used to scare those fierce spirits. For those good-natured people they don't use them.

*Netherworld soliders tasked to bring the dead down to the courts to be judged.

Q60: Do animal and bird spirits appear in the same form in the netherworld?

A: They belong to the juristiction of another department. I'm not too sure about it.

"He whose conduct is very bad,
Is like oak tree choked with ivy;
So does he inflict upon himself,
what enemies would wish for him."

A young boy's life was lost for nothing, all because of a staring incident between 2 groups of youths. Those 4 guys who killed him are themselves charged with murder, their own lives ruined. The root cause for all this violence and tragedy is none other than their own Anger. Anger is their prison, for it binds and burns these kids, reducing them all to ashes in the end. Even the friends of the victim show themselves to be full of anger at the funeral; little do they realize what consequences such behaviour will bring for them in the near future. 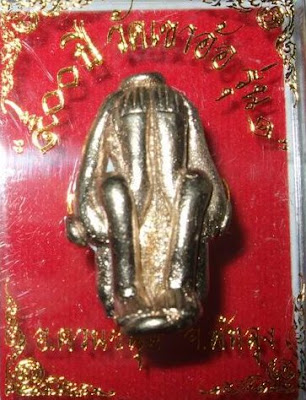 Young people today have no education in the Dhamma, and as such they have no control over their base emotions. Unrestrained, these emotions drive them to do all sorts of foolish deeds, leading to their own ruin. If Darren and his friends could suppress their anger and just walk away from the other group's "challenge", it would not have ended up in bloodshed. There is a time to fight and there is a time to just walk away. Those wise in the Dhamma avoid conflict even before it can materialize into action, by shutting one's eyes and ears from external bad influences. Ignorant people think that to walk away from a fight is cowardice, but it takes true courage to overcome your own ego and do the right thing. If we have to fight, it will be for a just cause; to protect the weak and the innocent. Never to support our own egos or out of anger for those who offend us. This is the way of the Dhamma warrior. Hope all the angry young people out there can learn a lesson from this tragedy.