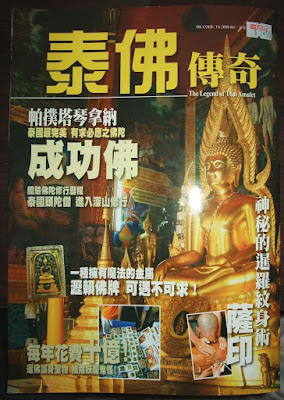 I was walking past a news stand a couple of days ago, and I saw this new Thai amulet magazine from Malaysia titled "The Legend of Thai Amulet" or 泰佛传奇 on sale. This should be the third one after "Siam Horse" 暹马 and "Siam Buddha Manual" 暹佛秘笈. It looked quite attractive on the outside, but priced at $7.50 I thought it was a little expensive. 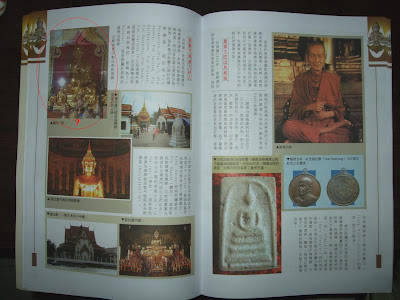 Upon reading it, I found that it had quite a no of misleading info and pictures. For example, on the above article about Somdej Toh, they ripped off my Wat Ampawan, Singburi photo (top left corner) and tried to pass it off as a photo of Wat Rakhang in Bangkok. Look, I don't mind if people use photos from this blog, but at least have the courtesy to inform me please. It is one thing to rip off my photos; even worse, they mislead readers with wrong info about them. 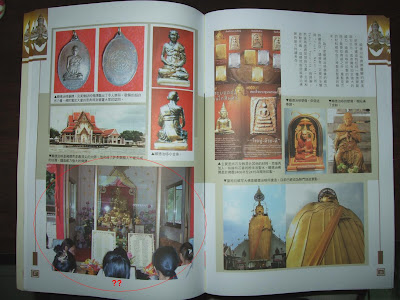 On the next page, they again used my photo of female devotees praying at the Somdej Toh shrine in Wat Ampawan (lower left corner). But this time I don't know whether they are trying to pass it off as Wat Inn or Wat Rakhang. There are other blatant mistakes in the magazine, but I shall not point them out here. Overall this new magazine does have some good info, but they are all quite general in nature. It is undeniably ruined by the rubbish editing they did inside. My verdict - 3/10. Don't waste your money buying it.
Posted by Wayne Woo at 12:51 AM 3 comments: 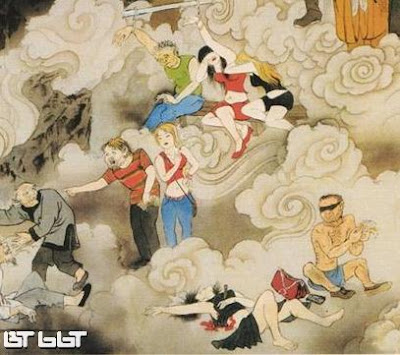 The Sutra of Limitless Life says:

"But this world is filled with evil, such that good no longer occurs naturally. Beings seek hard to fulfill their desires, resorting to mutual deception; their minds and bodies are strained and troubled, drinking suffering and eating poison - these evil works never come to rest."

Indeed, these verses of the Buddha accurately describe the times that we are in now. Because of our tireless pursuit of desires, the world we live in is turning more and more turbid; so much so that even the water we drink and the food we eat become poisonous. 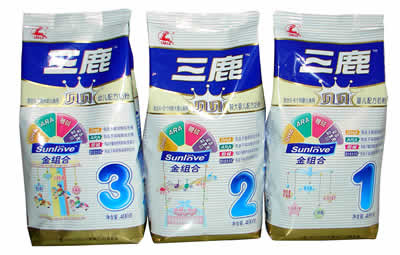 Which brings us to the latest news, focusing on the growing scandal of China's famous Sanlu brand milk products, which was discovered to be contaminated with melamine for months. Melamine is a toxic chemical used to create the illusion of extra protein in milk, but causes kidney stones or kidney failure when ingested by the body. Above we see packets of the toxic baby milk formula sold widely by Sanlu. 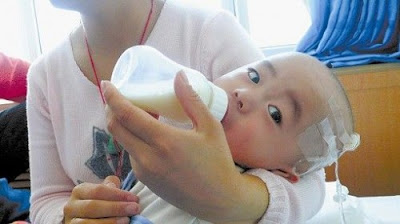 So far 3 babies had died of kidney failure, 158 in critical condition and more than 6,000 sick with kidney stones. The nationwide outrage has caused heads to roll, including Sanlu chairwoman Tian Wenhua and party officials in Shijiazhuang (provincial capital of Hebei), who did not report the contamination even though they have learned of it on August 2nd. Individual dairy farmers were also arrested for adding melamine into fresh milk. However these guys are just the henchmen; the real culprits are the unethical factory bosses and the corrupt officials.

And the effects of this scandal can be felt not only in China. Besides Sanlu, related Chinese dairy brands like Yili, Mengniu, Yashili and Suncare have exported their tainted milk products overseas to places like Hong Kong, Taiwan, Singapore, Yemen, Bangladesh and Myanmar. This caused all the affected countries to stop importing all Chinese milk products and test all existing stock for melamine content. Most of those belonging to Sanlu are found to be unsafe and were disposed of. But for those already sold into the market and taken by consumers, nothing much could be done. Fortunately enough, there are no reports of poisoning in the affected foreign countries so far.

Who would have thought that Japan, a country with a reputation of cleanliness and efficiency would also be struck with a similar food scandal at the same time? Unscrupulous rice traders in Japan were found to have imported industrial rice tainted with mould and pesticide and sold them to food companies as edible rice. These tainted rice from China, Vietnam and the US had since been made into all sorts of food like rice cakes, rice biscuits and rice wine. Shockingly, thousands of Japanese already consumed these rice products, but with no reported ill-effects. Authorities say that was because the concentration of pesticide in the rice was too low to harm people, even though it exceeded government regulations. Still, the Japanese could not believe such a thing could happen again to them so soon after the contaminated Chinese dumplings scandal. 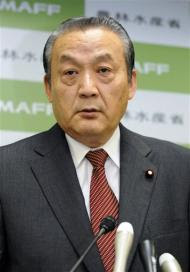 Well this has caused a rice distributor to commit suicide as well as the newly appointed agriculture minister Ota Seiichi (above) to resign in shame. What does the current episode of poison milk and poison rice in East Asia tell us? It tells us that that even though contaminated food can harm many innocent people, it cannot harm as many people as a "contaminated" mind. A mind poisoned by greed, imprisoned by craving transforms the world into a sorry place. Those greedy milk merchants and officials in China, as well as the dirty rice merchants in Japan only care about earning money and expanding their business beyond their means; they don't care about how much harm they would cause the people in their own country. But what goes around comes around. The worldly law had caught up with them and they must now pay for their crimes. In the future, the fruits of Karma will also ripen and great torments await them in the lower realms. The real poison is not melamine or pesticide; the real poison is greed. Greed seeks to benefit deluded individuals at the expanse of the masses, but in the end the greatest harm is bore by those individuals themselves. Therefore we must purify the mind with Dharma and let it be free from greed. Let us pray for those who drink suffering and eat poison; may they come to their senses and follow the Buddha's path, sadhu.
Posted by Wayne Woo at 2:11 AM No comments: 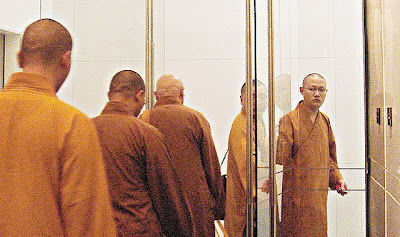 "Many who wear the yellow robe,
who are unrestrained in evil things,
these evil ones by their evil deeds,
in hell do they arise.
Better to eat a ball of iron,
glowing as flame of fire;
than to eat the people’s alms,
immoral and unrestrained."

Last week there was a report in one of the HK paparazzi magazines on a bunch of errant monks' misbehaving in neighbouring Shenzhen. Apparently this group of monks come from the Mainland, from Jiangsu province to "work" in HK. They were staying at Xi Fang monastery while they were there. A pious lay devotee, Mr Yang, CEO of Xun Ri Corporation had invited monks from the monastery to perform Sutra chanting sessions at his HQ office on a regular basis to bless his business. However, the monastery had very few resident monks. This group of mainland monks, being "professional chanters", volunteered themselves for the task with the approval of the Abbot, who did not suspect anything at first. Above we see the group reporting to Mr Yang's office for "work" in the morning. Mr Yang pays each monk a handsome fee of 1,000 HKD for their services daily. 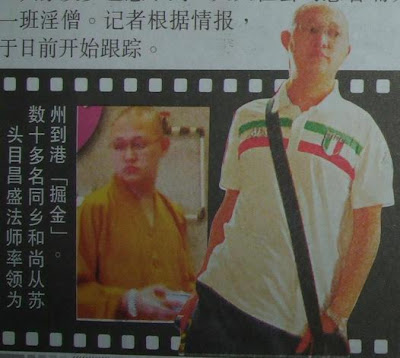 The leader of the pack, Ven Changsheng, who brought the group to HK from Suzhou district to earn money. In the day, he and his pack are in neat yellow Sangha robes, looking solemn and dignified. But once the night sets, these guys change into their savvy civilian outfits before crossing over to Shenzhen for some "rest and recreation". The wayward activities of these monks were first noticed by Mr Yang's employees when they went over to Shenzhen for food during the weekends. 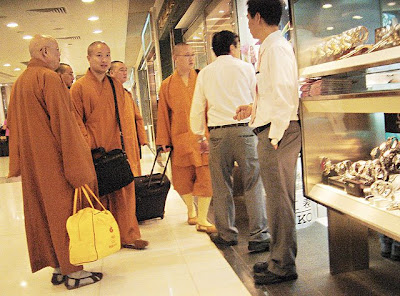 The pack shopping for luxury watches at Shatin Mall after work. 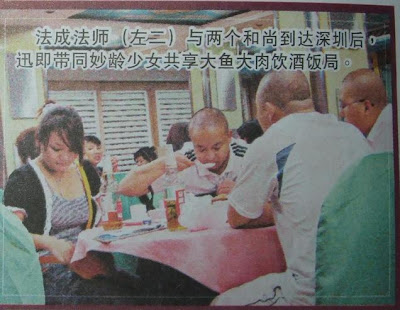 The employees spotted these monks wearing civilian attire gorging on meat and alcohol with their female companions in one of the restaurants. One of them tipped off the HK paparazzi and immediately reporters were sent to tail the monks. Above we see Ven Facheng (2nd from left) with his young "girlfriend" having a hearty feast. They were accompanied by 2 other monks. 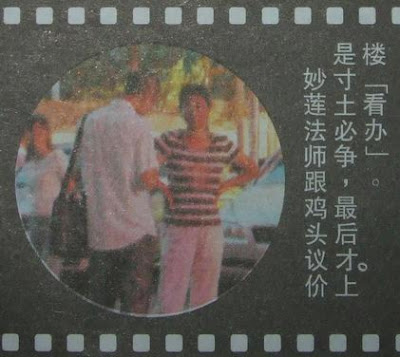 Another monk, Ven Miaolian, was photographed bargaining with a lady pimp for the sex services of her girls. The reporter also found out that they were regulars there and the pimps had no idea they were "real monks". 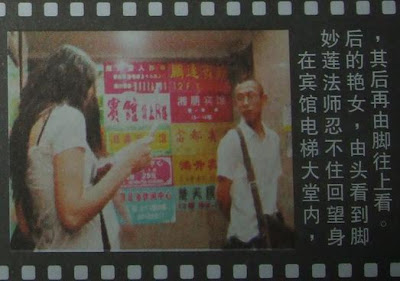 On the way up to the love motel, Ven Miaolian also eagerly checks out another attractive lass in the lobby, scanning her from head to toe. Unfortunately, the practice of Kayanussati is hardly on the mind of this monk. 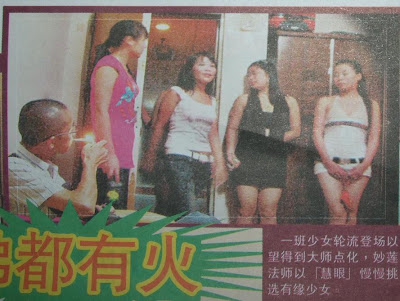 Inside the whorehouse, Ven Miaolian lit a cigarette while the lady pimp parades her girls before him for selection. This monk is said to prefer the fleshy types, and at times threesomes. Woe betide him.. Now, just before you dismiss these guys as fake monks, think again. They are real monks with ordination booklets and proper training in chanting. When the reporter went back to HK and reveal this scandal to the Abbot, Ven Kuanyun, he was outraged. He said it was unfortunate that there are black sheep in the monastery, but it was also inevitable because many monks from different places come and go in this place. Ven Kuanyun promised to kick these monks out, but whether they would be expelled from the Order or not would depend on the Mainland Sangha. It was always difficult to control who gets ordained and where as China is such a vast country. As one insider pointed out, among the countless monasteries in China, many are those who ordain for a living rather than cultivating the Dharma. If they work as an ordinary worker, at most they could earn 1,000 plus RMB per month. But as professional chanting monks, they could earn up to 10 - 20,000 RMB per month! This is due to the increasing demand for religious services among the urban Chinese populace, not just in HK, but also on the Mainland. Herein lies the crux of the problem - the commercialization of Buddhism. Many more fools like Ven Changsheng and gang will grow, attracted by the rich rewards that being a chanting monk offer. They can then spend that money enjoying food, alcohol, smoke and women. But these fools have no idea that the price to pay for those fleeting sensual pleasures is immensely severe indeed. Engaging in those vices as members of the Sangha is a terrible karma that they cannot begin to imagine. Unspeakable torment awaits them in the hells after the dissolution of their human bodies. They are going to stay in there for a very very long time. I believe the practice of paying money to monks to chant Sutras should be abolished altogether. Monks who provide such services should be provided with only food, nothing more. This will turn off those who ordain just to make a living. Surely if the Mainland Chinese Sangha does not take some steps to enforce the Vinaya and cut down commercialization, the hells are going to become very crowded places soon.
Posted by Wayne Woo at 1:30 AM 9 comments: