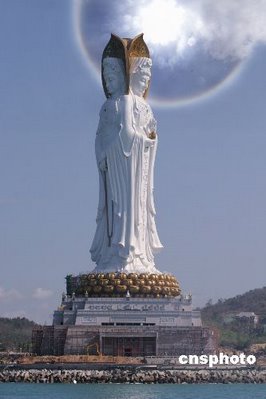 "The Buddha's body fills all things,
Appearing universally before all sentient beings;
Depending on causation & responding to feeling it never fails,
Yet always remaining in the seat of Enlightenment."

One day at 11.30am, 13-5-2005, inside the Nanshan tourist area of Sanya in Hainan Island, China, the skys quickly turned into a deep blue colour. Five mins later an incredible halo of light started to appear in the sky right about the great 3-sided standing Guanyin statue by the sea (as seen in the photo above). It lasted for around 40 mins & almost a thousand tourists witnessed this amazing sight. Those with cameras snapped incessantly, & Buddhists & non-Buddhists alike were filled with awe. Was it a manifestation of Guanyin like the Buddhists believe? Or was is a natural phenomena caused by changing climate & evaporation like the scientists say? Those who understand the Dharmakaya will see that these 2 explanations are not in contradiction with each other. 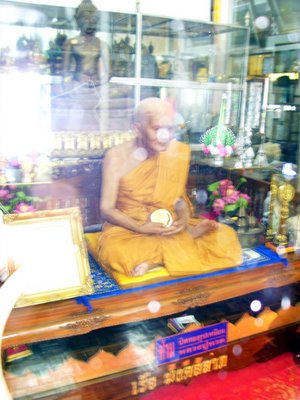 There was a small report on the above incident in the Chinese papers last year, but I think not many people could remember it. So I would like to show you 2 photos of mine taken in Thailand in recent times. This photo of LP Tuad's wax statue, taken at one of the the shrine halls of Wat Pako in Songkhla, is where they hold the sacred crystal orb given to him by a Naga when he was still a baby. Notice the many white orbs of light floating about in the picture. They cannot be found in any of the other photos that I have taken at Wat Pako. Many people believe these orbs of lights to be spirits, invisible to the naked eye but sometimes able to be captured by the camera. I do believe that wherever there is a site of great power, there tend to be many invisible beings assembling there to pray & pay homage, just like us humans. Cynics will say they are lighting & camera faults, but unless they can provide strong scientific evidence proving otherwise, why should anybody take their word for it? 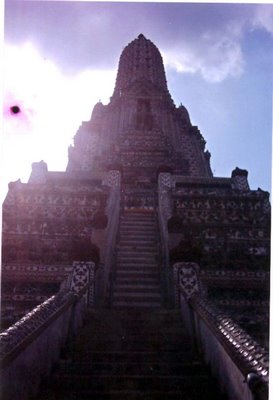 Another photo I found special is this Chedi taken at Wat Arun in Bangkok. See the dark purple orb in the sky on the left side of the photo? What could it be? Perhaps the Sun, but the Sun could not be purple in colour right? Could it be some sort of Deva? Its glory does surpass the small white orbs seen above by many times. I leave this for readers to ponder themselves.
Posted by Wayne Woo at 1:40 PM 1 comment:

A Glimpse of the Buddha-nature 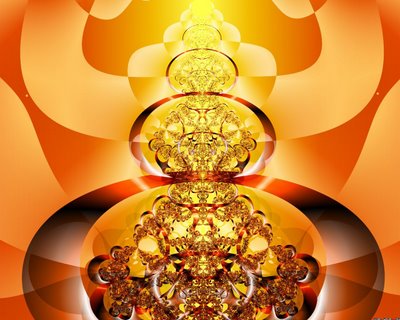 "Such as the True Thusness, which is a body of shining light."

A couple of days ago, while dozing in my chair, I had experienced for myself what the above verse means. My mind was in a dreaming state when suddenly I found myself engulfed by a nimitta (mental image) of very powerful light, covering the entire dream universe. For a short period of perhaps 10 secs, I experienced a profound bliss, something which I have never experienced before in my life. Could this be the infinite light of our true mind, the Buddha-nature? Is this the same light that people see when they have near-death experiences (NDE) or when they first enter the Bardo state (described in the Tibetan Book of the Dead) after death?

Whatever it is, it was quickly over and my mind fall back into its normal dreaming state, after which I woke up in a short while. I believe the entire episode only lasted a few minutes, but it left a deep impression on my mind.

I read in the past when some practitioners experience this clear light they find themselves losing all sense of time & space. One guy related that he was walking to his car in the car park from his office when he suddenly had this awakening experience. His conceptional mind was dissolved at the moment and a walk that normally took 5 mins was reduced to like, a few seconds. This is also the same as meditators who enter Jhana for hours, but they themselves thought that it was only a few mins. Here is a story to illustrate this point:

One autumn, Ven Xuyun was travelling with a companion when he decided to rest in an abandoned hut for the night. He started a fire to boil water inside the hut, but while waiting for the water to boil, his mind converged into Samadhi there & then. When Ven Xuyun came out of the state, the fire was long dead and the water in the pot was already frozen, because it was already winter! Not knowing what happened he asked his companion who happened to be sitting nearby. The companion informed Xuyun that he had been sitting by the fire place for more than a month. Knowing that he would eventually "wake up", & not wishing to leave him just like that, the monk had somehow waited in the vincity faithfully all this time. Ven Xuyun was quite surprised to hear that, but he also had new found respect for his companion. This story tells us that the true mind is beyond all physical laws. Concepts of size, distance, time, space cease to exist, overrided by the omniscient & omnipresent virtues of the Buddha-nature.

The Buddha & all the Noble Ones must have experienced the same thing when they attained enlightenment, but at a much more intense & permanant level. I may still have a long way to go, but surely I too, will attain enlightenment in this lifetime if I never give up my Dharma practice. Let us all work hard.
Posted by Wayne Woo at 1:48 AM 3 comments:

Holy Wars & the End of the World 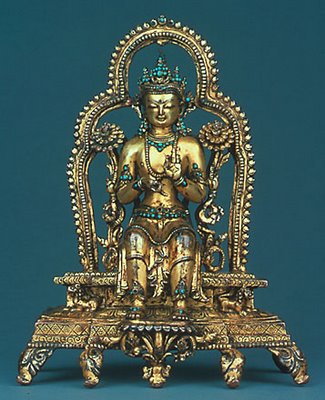 All religions, especially monothestic ones like Islam & Christianity talk about Holy Wars & the End of the World. But what about Buddhism, which does not believe in violence or an Almighty God that creates & destroys the world? Surprisingly, there are such concepts in Buddhism, but they are nothing like what the other religions conceive them to be.

In Buddhism, the only "holy war" is the war with your own mental defilements like craving, hatred & ignorance. But unlike other wars, we do not seek to destroy these enemies, which are in reality part of ourselves. When we practice the Dharma, we seek to transform our defilements, not fight with them. Thus craving becomes contentment, hatred becomes compassion & ignorance becomes wisdom. In this way a sentient being is no different from the Buddha.

There is a also a concept of the end of the world, but the end is not really the end because all worlds go through the 4 stages of becoming & dissolving in an infinite cycle, in the same way as sentient beings live & die again & again in Samsara. However, the lifespan of our world is so long that the end is unimaginable to an unenlightened mind. Currently, we are in the Bhadda Kappa (Virtuous Aeon) and there would be 1000 Buddhas appearing in this aeon. From Kakusandha Buddha to our current Shakyamuni Buddha, only 4 Buddhas have appeared, and there are 996 more to come. From one Buddha to the next, there is an in-between period of around 5.76 billion yrs (according to the scriptures). Since no human can ever live to see the next Buddha - Maitreya, let alone all the other future Buddhas of the age, worrying about the end of the world is totally pointless.

What is really important is for us humans is to make the best use of our present existence to try to reach, or at least get as close as possible to Nibbana, the end of suffering; otherwise our time on earth would have been wasted. Once our fleeting lives come to an end at any time, we may no longer have a chance to hear & practice the Dharma in our next existence. Who knows how long do we have to suffer in the Samsaric cycle before we are reborn in favourable circumstances again?
Posted by Wayne Woo at 2:59 AM No comments: 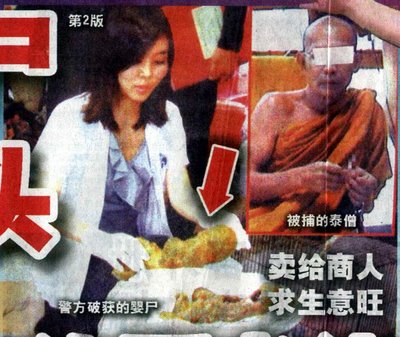 The Wanbao paper yesterday (01-12-2006) reported that a Thai abbot (pic shown above) from Roi Et province in Northeast Thailand (Isan) was arrested for roasting 2 baby corpses (indicated by the arrow) to make Lukkok. These Lukkok are then sold to businessmen as child spirits to attract wealth, for as much as 10,000 baht per corpse. This case reminded me of the necromancer Nain Ae, who was jailed years ago for a similar offence.

This abbot is around 60 yrs old & has been a monk for 30 years. He has 2 disciples living in the temple with him, 1 male & 1 female. According to the paper, the abbot does not beg for alms, chant & meditate like normal monks, but instead he had travelled widely to neighbouring countries like Laos, Cambodia & Burma to learn Black Magic. After the baby corpses were roasted, he would use his knowledge of the dark arts to transform them into Lukkok. This macarbe practice was discovered when the police visited their small temple for a routine check. Apparently the abbot has been doing it for some time, but his karma has finally caught up with him & now he has to face the legal consequences of doing things like that.

"Whereas some priests and contemplatives, living off food given in faith, maintain themselves by wrong livelihood, by such lowly arts as:

The Bhikku abstains from such wrong livelihood, from lowly arts such as these."

When a person puts on the saffron robe of the Sangha, yet practices such lowly arts such as black magic for a living, he is really without any sense of shame. Instead of training his body, speech & mind in the Dharma, he roasts babies to sell to foolish lay people. Mired in the swamp of wrong livelihood, does he not realize that the demons of Hell are also waiting to roast him after he dies? Woeful indeed!

In the Dharma Ending Age, the servants & children of Mara are everywhere, including those who have infiltrated into the Sangha and tries to destroy it from within. If we are ignorant enough to follow such imposters, we invite suffering upon ourselves for nothing. The importance of finding the right teacher in the Buddha Dharma can not be stressed enough.
Posted by Wayne Woo at 2:53 AM No comments: