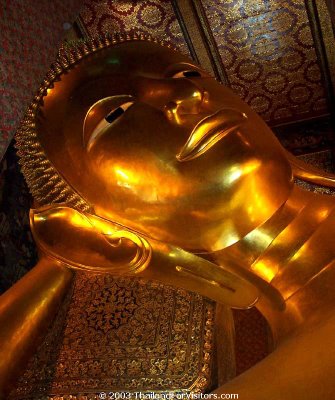 What is Nirvana? Why is there different kinds of Nirvana? What happens to the enlightened ones after they enter Nirvana & pass away? These are the questions that have puzzled many Buddhists & non-Buddhists alike regarding the highest goal of the Buddhist Path. Different traditions have different explanations of this concept, but it is the Mahayana scriptures that provide the closest answer.

Nirvana is best defined as "the unbinding of the mind from the mental effluents (asava), defilements (kilesa), the cycle of rebirth (vatta), & from all that can be described or defined. This term also denotes the extinguishing of a fire, & so carries the connotations of stilling, cooling, and peace."

In the Maha Parinirvana Sutra, Nirvana is described as possessing the 4 qualities of Permanance, Bliss, Self & Purity. Most who learn from the Pali Canon can understand why Nirvana is permanant, blissful & pure, but being so used to the concepts of Anicca (Impermanance), Dukkha (Suffering) & especially Anatta (No-Self), they find it difficult to grasp what did the Buddha mean when he said Nirvana is Self.

The Pali Canon also mentioned that the nature of Nibbana as being Viññanam Anidassanam, or Consciousness without Feature. In the Suttas, the Buddha was famous in his refusal to answer the query of what happens to Him after his Parinibbana or Final Nibbana. All that is mentioned is this "Consciousness Without Feature", nothing more. This term is best explained as being a non-active state of being so vast & subtle that it is beyond description.

This was why Ajahn Mun (1870-1949 a contemporary Thai forest monk who has attained Arahantship in his lifetime) was very disturbed by the visits from the Buddha and Arahants after his enlightenment. His immediate puzzlement was how a Buddha who has crossed over to Anupadisesa Nibbana (Nibbana without remainder) could possibly interact with our Conditioned Reality (this story is related in his biography, "A Heart Released"). Ajahn Mun's description of the Unconditioned (Vimutti) state is very similar to the Buddha's description of "Consciousness Without Feature" in the Kevatta Sutta.

The Buddha did not say what happens to him after Parinirvana bcos at that time the Kevatta Sutta was expounded, the listeners were not ready to accept the Mahayana teachings. But in the Maha Parinirvana Sutra, all these loose ends are explained in detail. What is called the "consciousness without feature" in the Pali Canon is none other than the Dharmakaya in the Mahayana scriptures, except that consciouness is already transformed into the 4 Buddha Wisdoms (Complete reflectivity, Perfect equanimity, Wonderous observation & Infallible success) and thus cannot be called consciousness any more.

The fact that Ajahn Mun could not understand how the Buddha & the past Arahants could still visit him after his enlightenment shows that the fruit of Arahantship is still far from that of the omniscient Samma Sambuddhas. What we understand from the term "anupadisesa nibbana" or nibbana without remainder is also not the true picture. Ultimate reality encompasses both the conditioned & the unconditioned, and thus cannot be separated into "with remainder" or "without remainder". That nibbana that can be separated is not the true Nibbana, but what the Mahayana Sutras described as an "illusionary city" for the Savakas (disciples) & Paccekas (solitary buddhas) to rest temporarily in because they do not have the aptitude to aim directly for the highest goal - Buddhahood.

When the Buddha talked about a Self, he was refering to the Dharmakaya, this ultimate reality, which is never apart from our own minds throughout all time & all space. This is the true Nirvana, beyond birth & death, coming & going, remainder & no-remainder, conditioned & unconditioned. It cannot be entered or exited because all the Buddhas never moved from it in the first place. So where are all those Buddhas now?

Right here in my closed mouth.
Posted by Wayne Woo at 11:49 PM No comments:

The Requirement of Zen 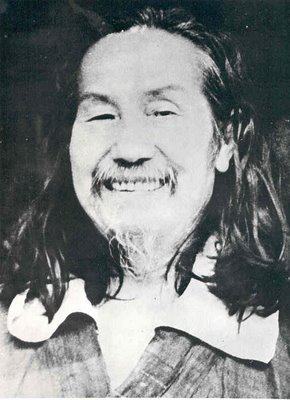 The Zen Patriach Linji once said:

"It is most urgent that you seek real, true perception and understanding, so you can be free in the world and not confused by ordinary spiritualists. It is best to have no obsessions. Just do not be contrived. Simply be normal. You impulsively seek elsewhere, looking to others for your own hands and feet. This is already mistaken.

What I point out to you is only that you shouldn't allow yourselves to be confused by others. Act when you need to, without further hesitation or doubt. People today can't do this - what is their affliction? Their affliction is in their lack of self-confidence. If you do not spontaneously trust yourself sufficiently, you will be in a frantic state, pursuing all sorts of objects and being changed by those objects, unable to be independent."

In the lineage of Zen, if the student cannot reach his master's level, or even if he just reach the same level as the master, he still cannot be considered a true successor. Only when he surpasses his master in achievement, such that even the Buddhas & Patriaches can't do anything to tame him, can he be considered a fitting Zen master! Such a person is a lion among men, destined to bear the yoke of the Buddha's heart transmission & give the lion's roar. Ven Yuexi is one such person who firmly believes in this. If you do not have that kind of absolute confidence in yourself, then Zen is not the path for you. Therefore crush all self-doubt & recognize your own Buddha-nature, for the infinite treasures of the Dhamma is always ready for anyone brave enough to grab them.
Posted by Wayne Woo at 3:13 AM No comments: