The Legend of LP Jamlong 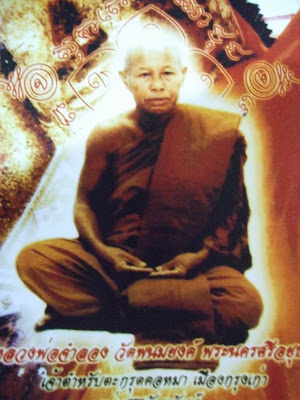 “My name is Long, Long with an L not an R, as Rong means always the second best, I am Jamlong and I will not be second to anyone.” That's what LP Jamlong used to say last time. He is a real adept monk from the old capital and this is certainly not a boast. LP's brief history goes like this - before he joined the Sangha he was a ‘Li-ke Guru’ (Li-ke is traditional Thai opera), and he also knew the ‘Chuchok Spell’ (Chuchok is a beggar king). Other Li-ke bands have to ask people for work, but for his band it was the other way round as they received so many invitations all the time. As long as he used the Chuchok Spell, all the money and necessities of life will keep coming to him without much effort.

Later he got tired of living in the superficial society, so he ordained and went to studied with LP Er of Wat Panomyong. LP Er is the one who taught Thailand’s statesman, Mr. Preedee Panomyong (he was also the one who advised Mr. Preedee to use the last name of Panomyong, after the name of the temple instead using his Chinese family name). After that LP went to practice with LP Pan of Wat Pad Ar. From there he learned to make the ‘Phakod’ (sacred knotted cloth) or ‘Bullet Proof – Gambling House Afraid – Magical Knotted Cloth’. His first try was done by using ‘Bungsukun’ cloth (a yellow robe placed on the coffin before lighting the pyre for performing a requiem by the monks). He tested the cloth by throwing it to the fire, and somehow it won’t burn. I know it sound ridiculous but if you don’t believe it, you can underline this paragraph and go to ask LP himself whether this is true or not.

At one time when LP Tim of Wat Phra Khao was still healthy, some villagers from Ang Thong Province came to worship Luang Por Chao Noi (the famous Buddha statue) of Wat Panomyong. They then paid a visit to LP Tim and asked him for some sacred objects with power for doing business. When LP Tim learned that they had already passed Wat Panomyong, he told them, “You have missed a real deal there; isn’t LP Jamlong there at Wat Panomyong? Why don’t you ask such things from him? He is quite an adept monk.” LP Than Chaokhun Sawat of Wat Salapoon also praised LP Jamlong as ‘one with very powerful mental force’. His Metta was really more intense than LP Sawat when he was younger. These testimonies guarantee that LP Jamlong is one of the most adept Wicha monks in Ayuttaya.

One day LP had a strong inspiration, so he took out some copper foils, rolled them up and bound them with twined rope. He then coated them with black lacquer before tying them around the neck of his dogs. The villagers and his disciples called it ‘Takrut Kor Mah Ayuttaya’ (Dog Neck Charms of Ayuttaya). Those dogs who wore the Maha Amnaj takruts were typical local Thai dogs. One of them dog had a fight with a foreign dog the size of a man. And the result? This Thai dog won without any scratches and the foreign dog had to run for its life. ‘Tam’ was another one of those dogs that wore his takruts. It took a nap at the Sala of the Sleeping Buddha which is situated at the temple’s frontage. Some villagers brought food to make a votive offering to the Sleeping Buddha and also wanted to light some firecrackers. To their surprise, the firecrackers won’t burn at all; they just keep extinguishing. Finally someone realized what's happening and bent down to see Tam lying under the table. They knew right then that it was Wat Panomyong’s dog and had to drive him off. This time those firecrackers burn normally and exploded loudly as they should. Another story was told that some naughty kids used a handmade muzzle-loading gun to shoot the dog but it also won’t fire. Miraculous, right?
Posted by Wayne Woo at 12:29 AM 1 comment: 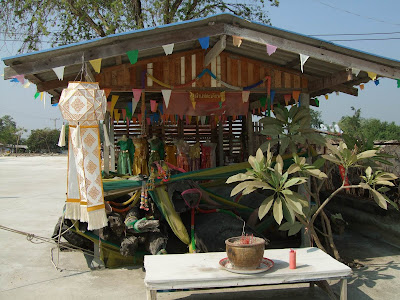 LP Chom of Wat Klang Khun Paen, Ayuttaya is the successor of the great master of Metta magic LP Sawai Wat Preedaram. I decided to visit this LP to check out his stuff. Above is the Mai Takian shrine at the temple. 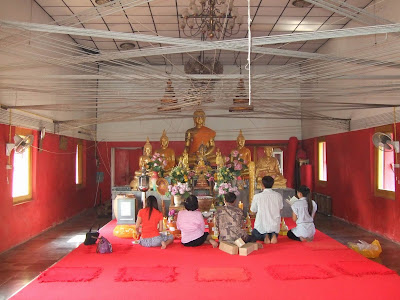 Devotees praying inside the Ubosot. 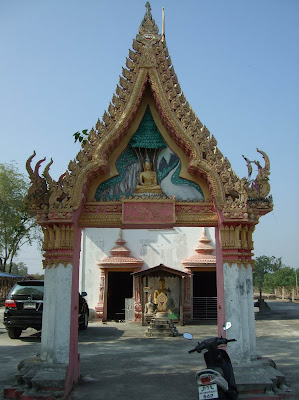 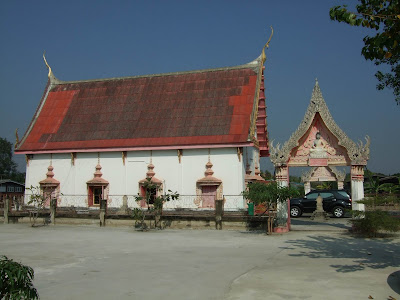 Side view of the Ubosot. 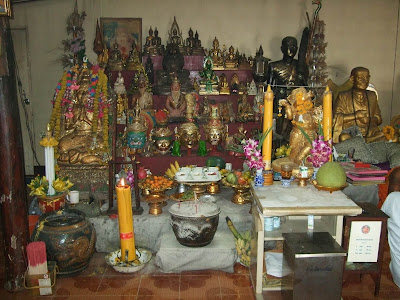 The main altar inside LP's kuti. Many Lersi buchas. Notice the giant Khun Paen on the left! 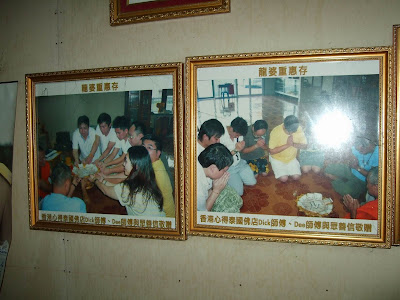 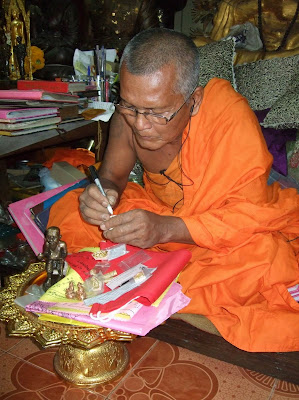 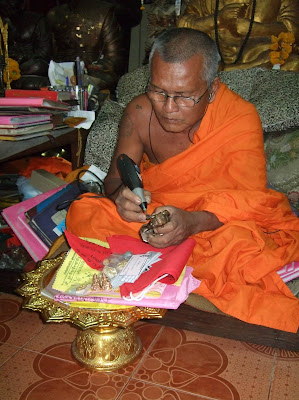 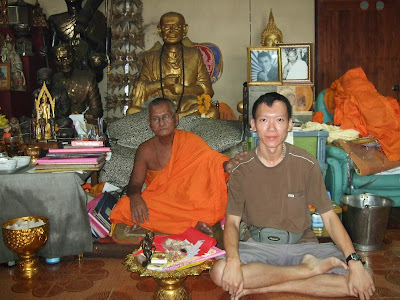 Photo with LP Chom. He is getting more and more popular overseas. 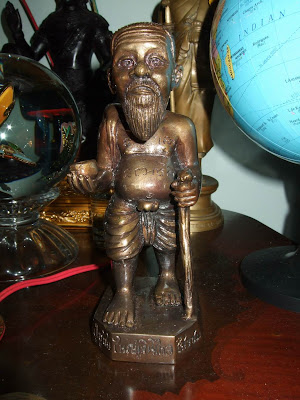 My Chuchok bucha.. it looks "live". 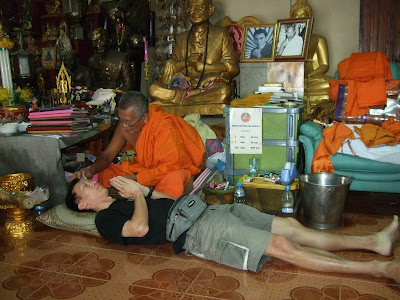 Having LP perform a Nanathong gold foil blessing on my forehead on my 2nd trip there. 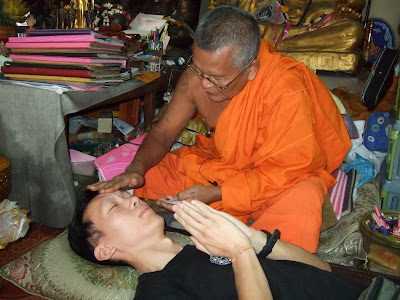 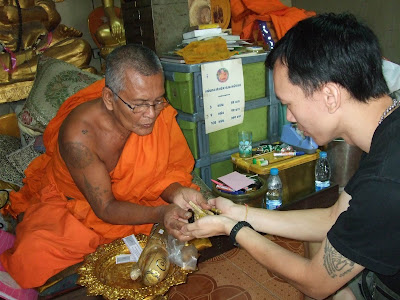 LP blessing the small tiger palakits that I chowed. 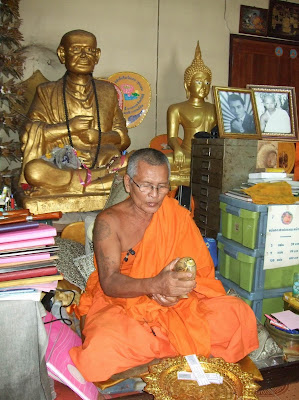 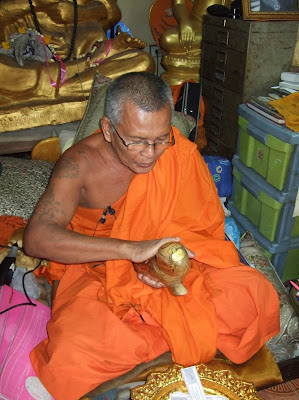 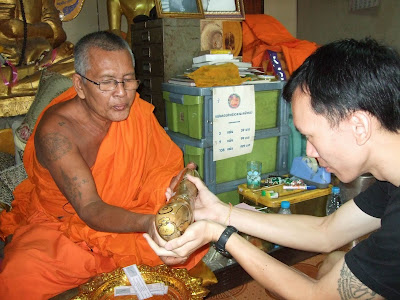 Blessing completed.
Posted by Wayne Woo at 12:26 AM No comments:

During the Qing dynasty era there was a rich man in Zhejiang province named Wang Weng, who had inherited much wealth from his ancestors. Wang married at 20 yrs old and in the 10 over years that followed, he had 9 children with his wife. However all these 9 children were retarded or of low intelligence. Despite their condition the parents still loved them very much.

In the reign of Emperor Qianlong, there was a severe famine and many people died of starvation. At this important time, Wang sold all his property and used the money to help with disaster relief in his hometown. Many lives were saved as a result of his generosity. Everyone who had received aid were very grateful and regarded Wang as a living Bodhisattva. What they did not know was that both Wang and his wife were strong devotees of Bodhisattva Guanyin. That was why they were able to perform Dana so readily, without any hint of stinginess. Dana is the foremost of the 6 Paramitas and Wang had indeed followed the Buddhist teachings wholeheartedly.

What happened after that brought a big shock to many people; Wang's eldest son contracted an acute disease and died soon after. In the space of a few years, the rest of his 9 children fell sick and died one after another! Everyone was puzzled and thought, "Wang and his wife made such a big merit by selling all their property to save so many lives; why did they not reap any good fruits for their good karma? Maybe their belief in Guanyin is not efficacious at all?" And there were also the foolish who thought, "Do good deeds and you get evil results. That proves there is no point doing good at all. Better for me to do what I want!"

Wang and wife were of course deeply saddened by their children's deaths, but due to their strong faith in Guanyin, they did not give up their belief even after what happened. They continued to pray to Guanyin everyday without fail. One day they wrote a proclaimation and burnt it in front of their Guanyin bucha to express their pain.

That night Guanyin appeared in Wang's dream and told him, "Good man, do not be sad. The 9 children you had previously were 9 demons, sent by the Heavenly Emperor into your family. As a result of hidden evil karma created by your ancestors, these 9 demons manifest as your 9 bad children to squander away all the wealth that they have accumulated. But due to the great merit that you have made by selling your properties to relief the great famine, he had decided to recall the 9 demons back. Not long after this the Scholarly Star will descend into your family. You have a bright future ahead, therefore rejoice!"

Wang woke up the next morning and told his wife what he dreamt about. To his surprise, his wife said she dreamt of the exact same thing! From then on the couple no longer felt sad and were inspired to continue helping those in need. Soon after Wang's wife conceived again and in the years that followed she successfully gave birth to another 5 children. All these 5 children were very intelligent, had excellent memory and were well-learned in all things. One of them was Wang Wenjian, who became the top scholar of the empire and eventually promoted to a Minister in the imperial court. Even up till today, Wang's descendants continued to be very prominent in their achievements.

This is a true story. The moral of the story is: Do not be happy if you have children; for they may well be your debtors from previous lives coming to claim what you owed them in the past. Do not be sad if your children die also, for they may just be leaving after claiming back the full debt from you. Or they may be your creditors, who will also leave once they have repaid what they owed you previously in full. Most of the time smart children who do their parents proud but die in their prime are such creditors. Complex as karma is, the intricate connections between close relatives can basically be summed up with 3 words - Debtors and Creditors. That's why those who can gain insight into the emptiness of worldly life and relationships will be able to remain calm no matter what happens.
Posted by Wayne Woo at 12:58 AM 1 comment: