This week there was an interesting report on a 9-month old baby boy in Russia's southern republic of Dagestan, who had verses from the Koran appearing and fading away from his body every few days. This mysterious case baffled the doctors, nurses and Muslim leaders who examined the baby. Since then, thousands of Muslim pilgrims are flocking to his parents house to catch a glimpse of this "miracle baby".

Naturally, Muslims will see this as an assurance of their faith. Even though skeptics have dismissed this story as yet another hoax, I believe the wise should give it the benefit of doubt until proven false. According to scriptures of Abrahamic religions, every time God wished to communicate with Mankind, he will do so through his prophets, angels or miraculous signs. So if God wished to use the baby as his scroll, it is perfectly normal for him to do so. But whether this story is true or not is not important; what is more important is whether the warring factions in that region are willing to abandon the anger in their hearts and end the conflict.

As such, we are reminded again of the futility of belief in an Almighty God; who is said to be able to create or destroy anything at will, yet cannot make the world a more peaceful and happy place to live in. So many people have abused his name to commit all sorts of atrocities and acts of terror, but God is also unable to stop them. Indeed, despite his limitless powers God also cannot make Man relinquish evil and cultivate goodness even if he wanted to. Ultimately it is Man himself who must decide his own path by choosing to follow either good or evil in his mind, and reap the fruits of his actions accordingly. Such is the law of Karma that applies to all beings universally, no matter whether you are human, animal, God, angel or whatever else.

That is why Buddhism does not emphasize on miracles of divine manifestations or psychic powers, but the miracle of instruction, which leads Man to change himself from within his own heart, not externally. Thus the Kevatta Sutta says:

Skillfully refining his own mind, avoiding all evil and cultivating all that is good, Man gradually reaches the end of all suffering. That is the true miracle. 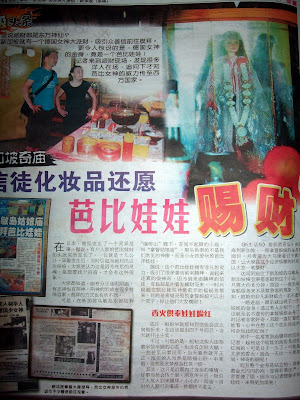 Malaysia's New Life Post paper on 17.10.2009 did a report on the peculiar Barbie Doll shrine on Pulau Ubin, Singapore's biggest offshore island. For the purpose of this report their reporters came over to Singapore and made a trip to Pulau Ubin. It is the only one of its kind in this region. The shrine has gotten so famous that even European tourists have come to pay their respects. Locals who have come here to pray for lucky 4-D numbers from her and managed to win also adore her like a wealth deity. 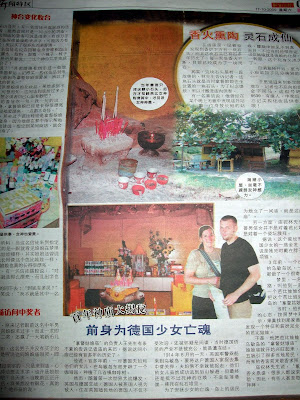 According to legend, the spirit residing in the Barbie Doll is that of a German girl, who resided on Pulau Ubin with her parents more than 100 yrs ago during the colonial era. Her parents started a small coffee plantation on the east side of the island, living a quiet life. However when WW1 started the Germans were treated with suspicion by the British rulers, and her family was no exception. In 1914, the British sent troops to arrest the German family with the intention of putting them in a concentration camp. The parents were captured but this German girl managed to escape to the hills behind the plantation. But in the end she accidentally fell down a cliff and got herself killed. 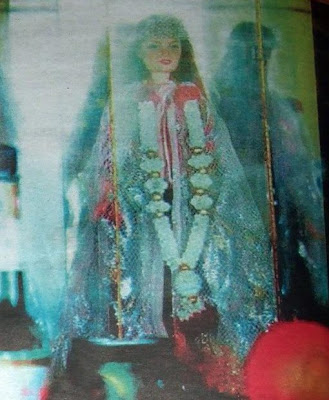 The photo of the lavishly decorated Barbie Doll. Even though the girl died, but her spirit continued to linger restlessly around that area for many years. So in order to pacify the girl's spirit, the villagers decided to build a shrine for her, naming it "Lady Datok Shrine". Datok is a Malay title for a noble person or respected elder. In the past devotees did not pray to a Barbie Doll, but an urn containing a lock of blond hair and crucifix necklace belonging to the German girl. But 3 years ago, she entered the dream of a local villager who has migrated to Australia, instructing him to go to such and such a shop to buy such and such a Barbie Doll. He was then to bring the doll back to the shrine from Australia. Though he was not fully convinced, he decided to follow her instructions to go look for the doll. And not surprisingly he did find the shop and doll described in his dream. So the villager brought the doll back to install inside the shrine, and from then on, the shrine started to become more and more popular. People came regularly to ask for various kinds of blessings from this German girl's spirit and in return, they brought offerings of perfume, cosmetics, facial products etc (things that a lady would like) to give thanks. That's why we see her "bucha" adorned like a goddess. This is not unlike the Mae Nak shrine in the Prakanong district of Bangkok. 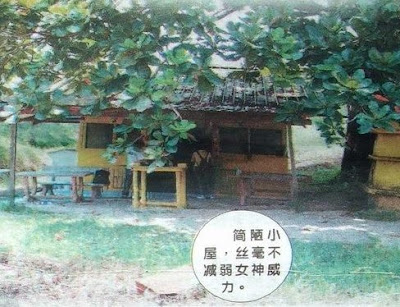 This shabby looking shack is the German girl's shrine. Outwardly it looks unimpressive, but what draws people is the "powerful" spirit inside! It is indeed strange that a European girl can come to this part of Asia and become a deity after her death. If we look at it in Buddhist terms, she is one of those Petas (ghosts) with great merit 福德鬼 and thus has the ability to help people. Previously she did not have a proper rupa (form), but now she has taken up residence in a doll, which is called Upadana Khanda, or the aggregates of clinging. Although she enjoys the veneration and offerings of her devotees, she would still have to leave all that behind when her Peta lifespan comes to an end. Thus Petas are characterized by their strong clinging to the physical world. Mae Nak was like that, and the Ghosts of Bang Rajan were also like that. The Dhammapada says:
I
"Beset by craving,
People run about like an entrapped hare.
Held fast by mental fetters,
They come to suffering again and again for a long time."
I
Seeing the danger of clinging, the wise cultivate dispassion towards all physical possessions and mental phenomena, and will eventually reach the shores of Nibbana.
Posted by Wayne Woo at 12:39 AM No comments: 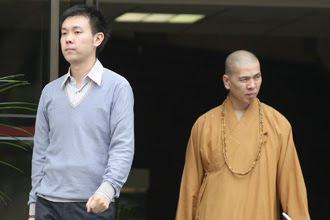 The ST reported on 7.10.2009 that "Former Ren Ci Hospital founder Ming Yi and his former personal assistant Raymond Yeung were found guilty on Wednesday on charges over an unauthorised loan from the charity's funds to his aide in 2004. Ming Yi, 47, was convicted on four charges, two of them jointly with Yeung, 34. They will be sentenced on Nov 11." 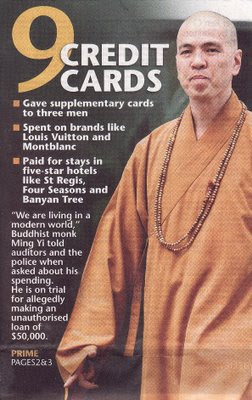 When asked by reporters what he would do now until Nov 11, he replied "Nothing. I will continue with my daily life as I have done before." Despite strong calls from the public and Buddhist community for him to disrobe, Ming Yi had yet to show any intention of heeding them. But in actual fact, Ming Yi had committed 1 of the 4 Parajika offences of stealing and is thus technically no longer a monk even if refuses to disrobe. Parajika are the most serious offences under the Vinaya and warrants expulsion from the Sangha, with no chance of ordination again in this lifetime. These 4 Parajika rules are the same for both the Theravada and Mahayana Vinaya. The only difference is for the Mahayana, there is no recognised Sangha authority to enforce the rules, unlike Theravadin countries like Thailand or Burma. 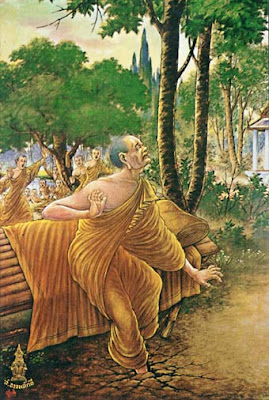 Ming Yi's current situation is just like that of Devadatta, as described in the Ubhatobhatta Jataka story of the foolish fisherman. In it the monks residing at the Bamboo Grove described Devadatta as one who was not fulfilling the duties of a monk as taught by the Buddha. So he was not really a monk, but somebody who wandered here and there pretending to be a monk. And he was also not a layman, as he had lost the resourcefulness of a lay person. Therefore he was like firewood that has been burned from both ends and smeared with dirt in the middle. Losing out from both sides, no longer gaining the achievements of a monk nor the benefits of being a member of the royal family. Likewise, Ming Yi failed in his monastic duties, broke the precepts and thus can no longer be considered a monk. He was also not a lay man, having gained the wealth and fame he has through the veneration and donations of his devotees. Excuses of being a "modern monk" appear hypocritical to the discerning, and cannot justify his indulgences in worldly luxuries and the 5 sensual pleasures. 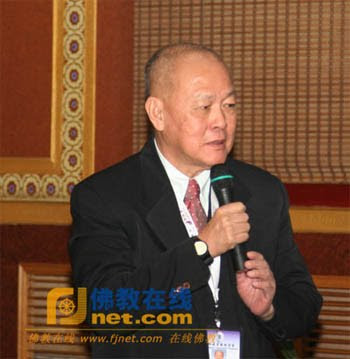 In the words of Mr Li Muyuan, chairman of the Buddhist Lodge, if you want to be a "modern monk", it is best to disrobe and wear a t-shirt and jeans instead. As a lay person, you can do business, make as much money and enjoy yourself as much as you want, without fear of anybody criticizing you. But if one remain as a monk, one will be scrutinized by the public, the laity, as well as fellow monastics. Not to mention the invisible Noble Ones and guardian deities in the 10 directions. If Ming Yi has any sense of moral shame and fear of wrongdoing left in him, he should disrobe ASAP and bravely face the consequences of his misdeeds. Only then can there be redemption and repentance for him. May he turn from the darkness and return to the light of wisdom, sadhu.
Posted by Wayne Woo at 6:51 PM 3 comments: 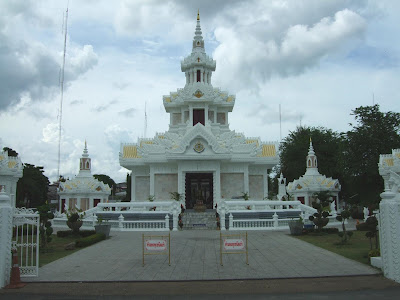 On my 2nd trip to Nakhon Si Thammarat I visited a few more important landmarks there. Above is the famous Lak Meuang or City Pillar Shrine. 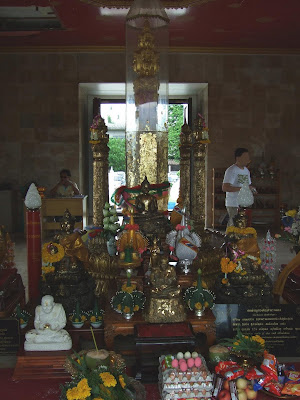 The City Pillar here was unique in the whole of Thailand due to its special Jatukam head. As we know in 2530 Khun Sanpetch and Khun Pan invited the deity of Jatukam to reside in the pillar with the help of medium Ajarn Kopong, so as to return peace to the then chaotic province. Curiously there were also 2 LP Tuad buchas on the altar below the sacred Jatukam pillar. 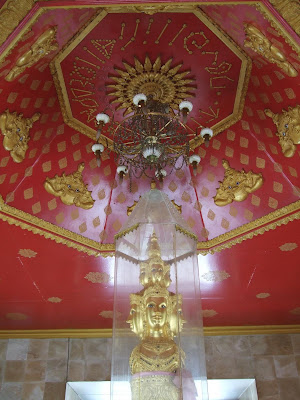 On the roof above the 8-faced Jatukam head there was a hexagram with 8 Rahus and 28 constellations. 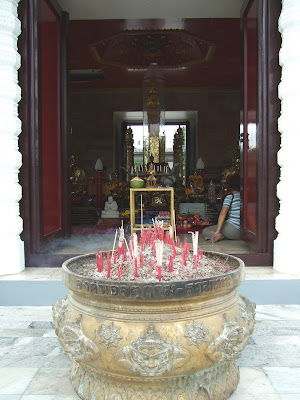 The large urn in front of the shrine.
Then I headed over to Wat Mahathat. This is a video of the main shrine leading to the sacred Phra Boromathat Chedi. 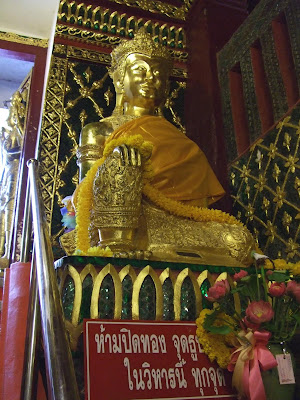 A close up of the statue of Jatukam's brother Ramathep, guarding the left side of the Chedi entrance. 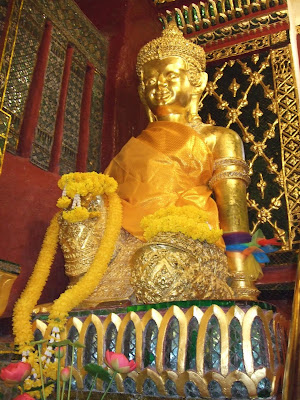 And of course Jatukam himself on the right. 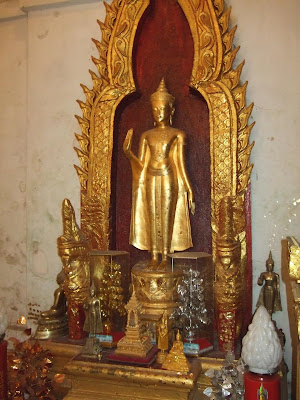 The Ayuttaya style Phra Ruang at the side. 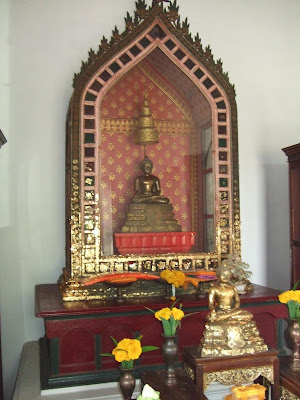 After that was the Phra Buddha Sihing shrine hall, located between the provincial hall and court house. Quite surprisingly, the sacred Buddha Sihing bucha of NST province was quite small, with only a lap width of 7". This 700 yr old Buddha statue from Sri Lanka once mystically prevented a bandit-planted bomb from exploding inside the shrine. 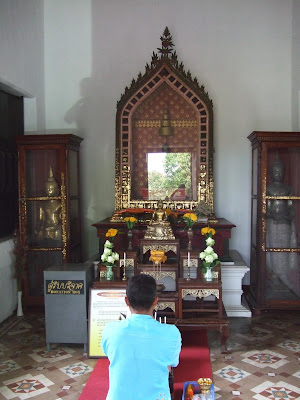 My driver prayed to the Buddha image for safety and success. 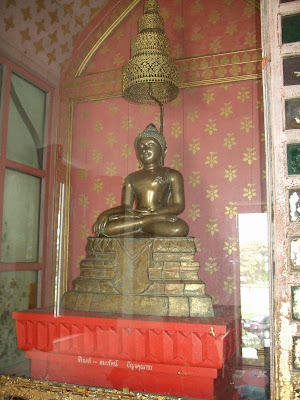 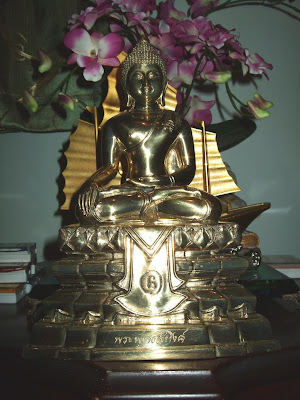 The 5" Buddha Sihing bucha I chowed from Wat Mahathat recently.
Posted by Wayne Woo at 11:30 PM No comments: