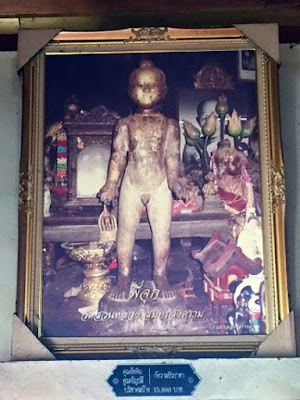 Ang Pee Jook Kuman is a powerful child angel; he looks like a boy with a topknot, 3 feet tall. He usually turns his right hand and overturns his left, and he wears only one chain across his chest and back. Ang Pee Jook Kuman possesses a very strong power over time and places. If you have faith in him, you can go to Wat Suan Laung Temple to worship him, can also carry his image with you all the time. People have always talked about Ang Pee Jook Kuman’s miracle for a long time. The abbot of Wat Suan Laung Temple says that his senior told him about the original image of Pee Jook Kuman had been created for 180 years. It might be made at the same time as Wat Suan Luang Temple was established 200 years ago.

According to the local legend, although Wat Suan Laung Temple had been renovated several times, time kept ruining it gradually. The new abbot, Punyawaro, at that time, therefore, thought about the restoration of the temple again. Yet, he did not know how to gain enough money to fix, especially, the temple hall and its fence, a funeral pyre, a bell tower, and monk’s cell. So he prayed in front of the main Buddha statue in the temple, asked him for any suggestion to find a way to get enough money.

One night, before he went to sleep, he recited an incantation and meditated. Until midnight, his mind was completely in peace, he suddenly heard a boy’s voice calling him from the back of the Buddha image. The new abbot quietly gazed through the candlelight, and he saw a tan skinned boy with a topknot on his head. He did not put on shirt but wore bead around his neck. The boy kept looking at him and said that the abbot had already had the magical power in the temple, so he did not need to be worried. He also said that he would help the abbot find some money to restore the temple again.

The abbot, then, asked the boy that: “My boy, how could we finish restoring our temple? Only the temple hall alone you need more than a million baht. And how about the temple hall for sermons, the monks’ cells, the bell tower, the funeral pyre, and so on? How can I find that much of money, topknot boy?”

The boy said: “First you have to call me Brother Jook because I’m very old and I’ve lived in this temple for a long time. Don’t worry; I’m sure you can restore the temple. There are many amulets here. You can make and give them away for free, then people will come here to find them and you will gain enough money.”

When the abbot finished meditation, he stood up and looked for any amulet that the boy had talked about. His eyes suddenly met the image of a boy covered with thick dust, so he gently cleaned it and found that this amulet was the same thing with the one he saw in his vision. He was so excited and very happy because Ang Jook Kuman came to show him the way.

Pee Jook Kuman also created a miracle abroad. Miss Penporn Hoursen brought him to live with her in Geneva, Switzerland. She had a restaurant around the Old Town Cross, and said her business ran very well. She used to have a small restaurant, after bring Pee Jook Kuman she had to open another big restaurant.

Miss Penporn said that she nourished Pee Jook Kuman with sweet drink and candy and on that day he showed her miracle. She said that no ant or any insect came to eat these sweets while the sweets in other dishes which were not far from that was covered with ants and insects. This event made her believed in Pee Jook Kuman’s power.

Many people went to pray to Pee Jook at Wat Suan Luang to make wishes for lottery and they won. Some people has finiacial problems and business down with a lot of debts; they went to pray to Pee jook and 5 months later, returned to temple to donate because they had earn lots of money and change their car to a new Benz.

LP Peuk, ex abbot of Wat Suan Luang last time, mentioned that people around the temple always saw the spirit of Pee Jook came out to play, but only LP Peuk himself was able to talk to Pee Jook. After LP Peuk passed away, LP Mai took over as the abbot of Wat Suan luang temple. Lp Mai tried to communicate with Pee Jook until he was successful, so since that time Lp Mai made many batches of KMT Pee Jook and became an overnite success.﻿

This special batch of Pee Jook bucha from LP Mai is made with red copper and the base filled with old holy powder and takrut for calling money.
Posted by Wayne Woo at 11:09 AM 3 comments: