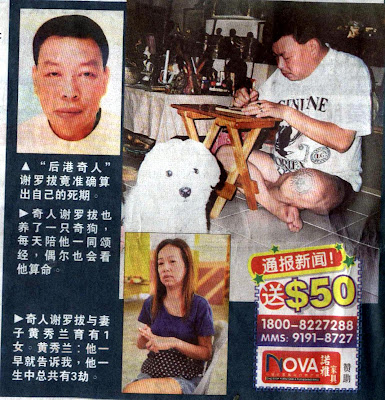 "The man who is without blind faith, knowing the Unborn; who has severed all fetters, cut off all karma and abandoned all desires — truly, he is the most excellent of men."

I read in Shin Min on 12.6.2008 that this local white robe Ajarn well-known for fortune-telling had passed away 4 days ago (on the 10th). The report said he had accurately foretold the time of his own death decades ago. Dying at 56 is quite young, but at least he excelled at what he did and help many people with his chanting. Ajarn Robert had devoted himself to Thai Buddhism since he was 18 and even ordained in Thailand before for 1 year. He leaves behind a wife, daughter and a faithful dog.

Apparently Ajarn Robert once predicted that he had 3 calamities at 54, 55 & 56 yrs old respectively. It is important to note that he has a medical history of diabetes and high blood pressure. For the first 2 calamities, he could still avert them through chanting and transference of merit to his debtors, but for the last one at 56, it could not be averted as it was his karma. True enough he was hit with a stroke at 54, which made his mouth crooked and affected his speech. But he managed to make a recovery with the help of acupuncture. At 55 he contracted cataracts and had to undergo an operation to remove them. Luckily for him, the operation went smoothly and again he recovered. But finally at 56 he was struck down with lung cancer and by the time it was discovered, it was already at the last stage. So he peacefully accepted that his end was near and let the karma take its effect. That way, at least he didn't have to carry it into his next existence. As he had made all the necessary funeral preparations, his wife did not have to worry much. He would be cremated today (Saturday) according to Buddhist rites.

This story reminded me of Mr Yuan Liaofan, who learned the ultimate divination knowledge of "Huangji Jingshi" from Master Kong. Kong was able to accurately predict all the significant events of his life, up till the time of his death. Once Liaofan was unhappy and tried to change a certain event, but he failed and the event turned out the way Kong had predicted. However, just as he was resigned to accepting that everything was predestined and nothing could be done to change it, he met with Chan Master Yungu, who taught him that everything could be changed as long as one sincerely practices the Dharma. This totally changed Liaofan's mindset and he decided to follow Yungu's advice earnestly. He performed as many wholesome deeds as he could on a daily basis, and in 3 years time, his destiny had been completely changed just like Yungu had said. Clearly karma is not all-powerful and the Buddhadharma offers us real hope of refuge and liberation from all the suffering in the world.

Another good example is my master, LP Jarun, who was supposed to die at 49 from a broken neck in a traffic accident. This was the fruit of his karma as he had broken the necks of birds in his youth. But due to the merit from his ordaining and earnest practice of Vipassana meditation, he was able to survive the accident despite having his neck broken. LP still had to undergo a lot of suffering before he could recover from such a severe injury. Nevertheless, it was a miracle of the Dhamma and all the doctors at that time were amazed that someone could break his neck and not die. Now LP is already 81 and every year he still has to ask permission from his debtors to let his 'Khandhas' go on for another year. They allow him to do so for the benefit of all beings who wish to learn his Vipassana method. When his task is finished, LP will enter Parinibbana in accordance with the wishes of those debtors.

Perhaps if Ajarn Robert had re-ordained in his later years and practiced Vipassana wholeheartedly, he would still be alive and well today. As a layman with a family it is very difficult to expiate one's karma indeed. Hopefully he will have the good karma to learn it in the future. May he be well and happy in the next existence, sadhu.
Posted by Wayne Woo at 12:23 AM 2 comments: