"But what, sire, is the duty of an Ariyan wheel-turning monarch?

It is this, my son: Yourself depending on the Dhamma, honouring it, revering it, cherishing it, doing homage to it and venerating it, having the Dhamma as your badge and banner, acknowledging the Dhamma as your master, you should establish guard, ward and protect according to Dhamma for your own household, your troops, your nobles and vassals, for Brahmins and householders, town and country folk, ascetics and Brahmins, for beasts and birds.

Let no crime prevail in your kingdom, and those who are in need, give property. And whatever ascetics and Brahmins in your kingdom have renounced the life of sensual infatuation and are devoted to forbearance and gentleness, each one calming himself and each one striving for the end of craving, if from time to time they should come to you and consult you as to what is wholesome and what is unwholesome, what is blameworthy and what is blameless, what is to be followed and what is not to be followed, and what action will in the long-run lead to harm and what to welfare and happiness, you should listen, and tell them to avoid evil and do what is good.

That, my son, is the duty of an Ariyan wheel-turning monarch." - Cakkavatti Sihanada Sutta
Posted by Wayne Woo at 3:28 AM No comments: 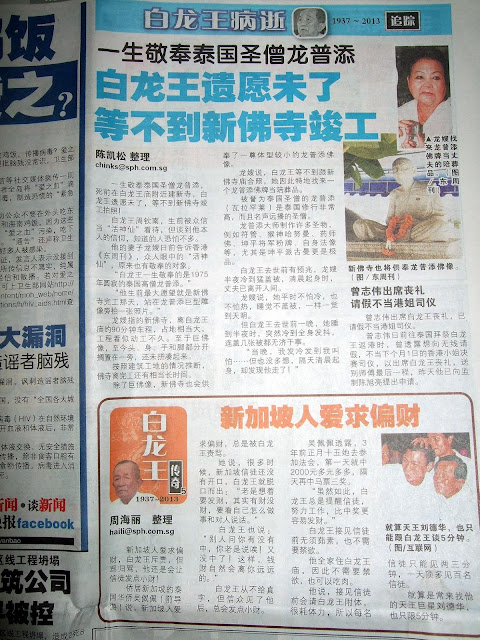 Recently it was reported that the White Dragon King (1937-2013), spiritual godfather to many HK and Taiwan celebrities who passed away a week ago, was himself a disciple of LP Tim Wat Lahanrai. Master Chow aka White Dragon King always venerated LP Tim as his guru monk, and kept many of his amulets. His wife had selected one of his favourites to be buried with him after the funeral. He was also building a new Buddhist temple not far from the White Dragon temple, with a large statue of LP Tim in the Vihara. However Master Chow died before the construction could be completed.

Unknown to many is that Master Chow was actually an ordinary man with no special abilities. His spiritual power come only after the White Dragon (Naga deity) chose him to be a medium. But as with all mediumship, it comes with a big price. When trancing a deity on a regular basis, it takes a huge toll on the body and in the long term one's health is affected and lifespan shortened. One only needs to take a look at the famous mediums of Jatukam like AJ Kopong and Luang Nui, who died not long after the Jatukam craze was over. When they trance Jatukam they performed seemingly superhuman feats like swallowing an entire bottle of XO (in AJ Kopong's case), but after the deity left their bodies, it is inevitable that some damage is done to their internal organs. Longer still I can remember AJ Tim of Wat Changhai, who was the first medium of LP Tuad. He too passed away at 57 yrs old, just as LP Tuad amulets were becoming famous throughout Thailand and overseas. As such famous mediums all have their share of health problems and die before their natural lifespan are exhausted. They may be able to help others through the deity's powers, but ultimately they cannot help themselves. In life they cannot escape aging, sickness and death, and in death they cannot escape becoming and rebirth.

"Better than sole sovereignty over the earth,
better than going to heaven,
better even than lordship over all the worlds,
is the supramundane Fruit of Stream Entry."

The Merits of Metta Bhavana:

Lord Buddha said - "Monks, when universal love leading to liberation of mind is ardently practiced, developed, unrelentingly resorted to, used as one's vehicle, made the foundation of one's life, fully established, well consolidated and perfected, then these eleven blessings may be expected. What eleven?

one sleeps happily;
one wakes happily;
one does not suffer bad dreams;
one is dear to human beings;
one is dear to non-human beings;
the gods protect one;
no fire or poison or weapon harms one;
one's mind gets quickly concentrated;
the expression of one's face is serene;
one dies unperturbed;
and even if one fails to attain higher states,
one will at least reach the state of the Brahma world.

Monks, when universal love leading to liberation of mind is ardently practiced, developed, unrelentingly resorted to, used as one's vehicle, made the foundation of one's life, fully established, well consolidated and perfected, then these eleven blessings may be expected."
Posted by Wayne Woo at 2:48 AM No comments: 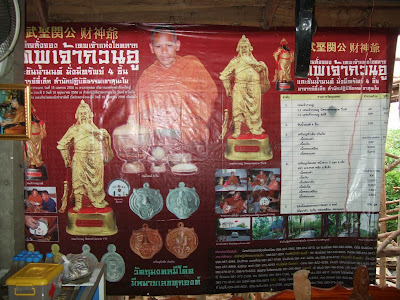 AJ Tee Lek was recently asked to consecrate a batch of Guan Gong buchas by Thai Chinese supporters from Bangkok. Above we see the banner at AJ's Samnak. 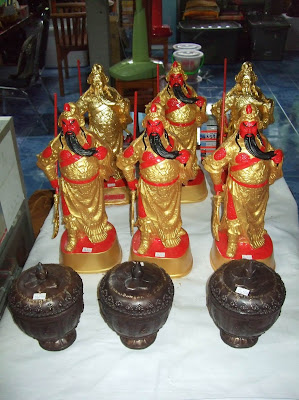 The Guan Gong buchas. There were also Nammon bowls. 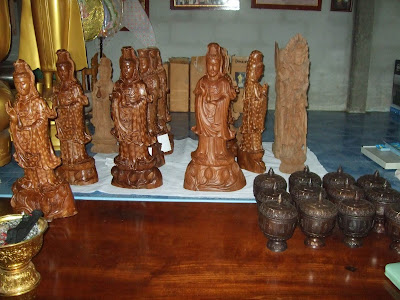 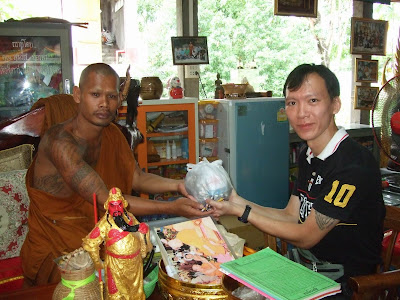 Chowing a bag of takruts from AJ. 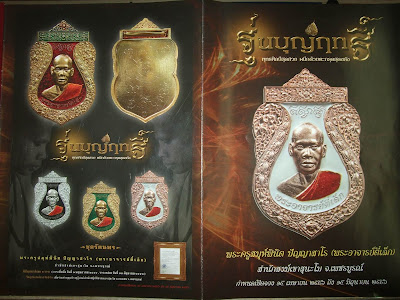 Catalog of the lastest Rians from AJ. 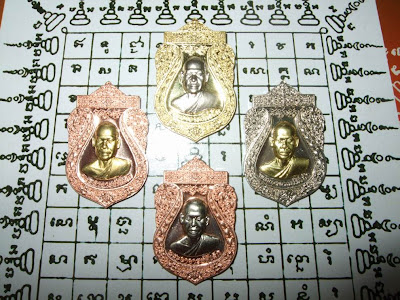 The copper and alpaka ones with Lersi and takrut behind. 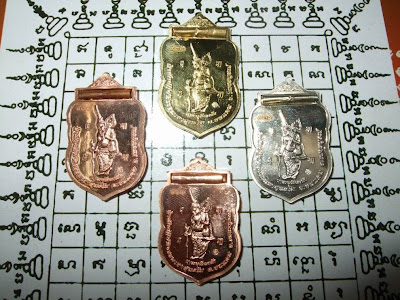 Back view.
Posted by Wayne Woo at 3:42 AM No comments: