LP Nenkam, the young abbot of Wat Pa Kantitham in Si Saket province has recently come under investigation by the Thai authorities for his massive wealth, luxurious possessions and allegedly immoral behaviour which violates the Vinaya precepts. He was propelled into national and worldwide attention after circulation of video showing him riding a private jet plane, toting an iPhone and Louis Vuitton bag. Not only him, but some relatives of LP Nenkam also became abnormally rich, with properties in their possession worth over 20 million baht along with numerous sports cars. It was also alleged that he was not only married, but had sexual relationships with 7 other women, one of them a minor. This is a "monk" living the high life of a tycoon, fat from the donations of the faithful. Not only had he committed Parajika offences which immediately nullifies his monkhood, he had greatly shamed the holiness of the saffron robe. 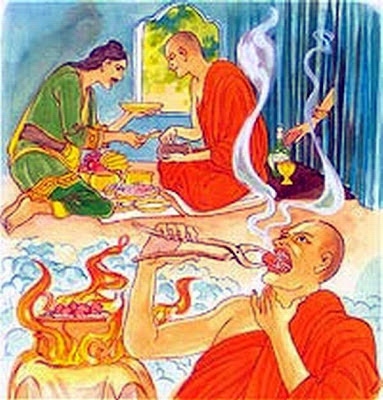 "It would be better to swallow a red-hot iron ball,
blazing like fire, than as an immoral and uncontrolled
monk to eat the alms of the people." 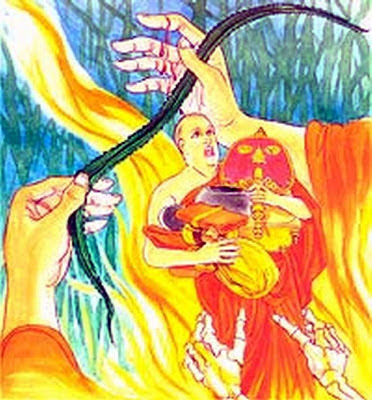 "Just as kusa grass wrongly handled cuts the hand,
even so, a recluse's life wrongly lived drags one to hell." - Dhammapada

LP Nenkam may still enjoy those worldly pleasures heedlessly at the moment, but if he even has any slight idea of the karma that awaits him, I think he would no longer feel any desire for them. Indeed, would he not regret eating caviar with the money of devotees, when burning iron balls are forced down his throat everyday when he reappears in hell? And would he still think of those women he had sex with when he is forced to embrace the burning pillars? Impossible to imagine are the torments of hell, yet this man in saffron robes knows not to avoid them. He pursues darkness and great suffering, instead of seeking the path of liberation. I truly pity such a man, and others like him. Will they ever awake from their deep ignorance?
Posted by Wayne Woo at 3:54 AM 4 comments: