The ghost who wants shoes to go home 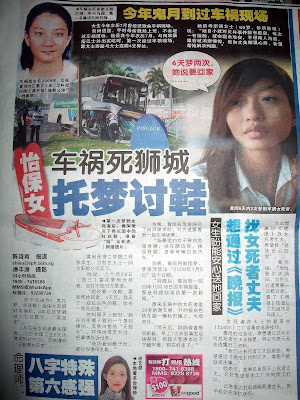 "Let go before, let go the after,
let go the middle, beyond the becoming.
With mind released in every way
you’ll come no more to birth and decay." - Dhammapada

A few days ago there was a report in Wanbao paper about a young lady, 20 yr old Huang Wen, who repeatedly dreamt of a lady asking her to get a pair of shoes and help her return home. Later she found out via the Internet that the lady in her dream was Xie Wenli, a Malaysian woman who used to work as a technician in Singapore. However this woman had died 3 yrs﻿ ago in a car crash at Tuas, which meant that her spirit still lingers aimlessly in that area. At first Ms Huang was very much disturbed by this paranormal incident, but after she offered a pair of new shoes and burnt joss paper offerings to Xie, she feels totally relieved of her burden. Well the question is, has the ghost of Ms Xie finally found her way home?

This story tells us again about "Upadana Khanda" - the aggregates of clinging that are present in all sentient beings. Even in death, Ms Xie clings to footwear for travelling, although ghosts do not have feet. She also clings to her hometown Ipoh in Malaysia, and still hopes to return there even though her previous aggregates had already dissolved. But ghosts are bound to their own regions and it won't be easy for an ordinary ghost to cross the sea and travel back to where she came from when she was still alive. As long as this mental clinging is strong, Ms Xie will continue to suffer in her ghostly form.

The best way to help her is not the shoes and paper offerings, which will only give her some temporary solace; but for someone to preach to her by reciting the "Heart Sutra" or "Diamond Sutra". Only when the ghost of Ms Xie realize the emptiness of all existence then will she let go of her clinging, the very thing that binds her to the ghost realm and aimless wandering. May the light of Lord Buddha and Avalokitesvara shine upon her, and lead her out of suffering, sadhu (3x).
Posted by Wayne Woo at 3:47 AM No comments: