Abbot quits monkhood to get married


This week there is a news report from China that shocked the entire Mahayana Buddhist community there. Ven Qing Xian, a 40 something yrs old Abbot of the famous Qiong Zhu monastery in Kunming, China suddenly gave up his monastic vows and got married to a 26-yr old lady. Qing Xian did not inform anyone in his monastery, but simply went to the Provincial Buddhist Association to tender his "resignation". The monks of the monastery only learned of their abbot's deeds after news of his marriage were splashed across the media. They still could not believe what happened until now. According to reports Qing Xian has been a monk for more than 20 Pansas, who also hold posts in the CCP party Kunming branch and was the vice chairman of the Provincial Buddhist Association. The lady he married is a young boss in the jade business, who probably had dealings with the abbot for some time. Ven Elder Xiu Guan commented that although we hear of young monks and novices giving up their monastic vows for various reasons, but never before in the history of Chinese Buddhism since the Tang Dynasty had anyone of Abbot level do something like that. Qing Xian has created history for being the first to do it in this Dharma Ending Age. Some journalists labelled him a "traitor" or "deserter" to the religion, and called for an investigation to be made on whether there were any corrupt activities committed during his term as abbot and vice chairman. 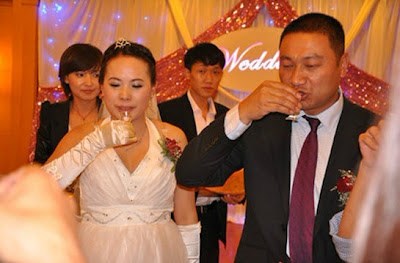 Now, if this happened in Thailand there would not be too much shock as people were not expected to stay forever in monkhood. The Thai Theravada tradition is generally tolerant of people joining the Sangha for short periods from a few weeks up to a few years. But even then, we hardly ever heard of monks at the level of Phra Kru (minimum rank for being abbot) or above giving up the robes for marriage. On the other hand, monks in the Chinese Mahayana tradition were expected to stay and there was always a social stigma attached for leaving the Sangha for no good reason. Ordinary Chinese folks would look down on such ex-monks for being weak in their faith. That applies to both junior and senior monks, and the higher one's rank, the deeper is the shame. 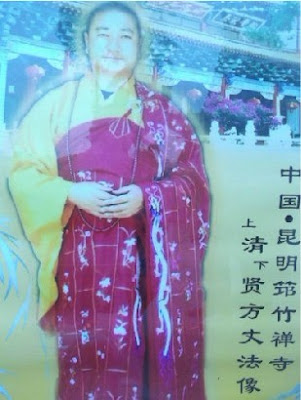 So by doing something like that, Qing Xian must be mentally prepared to accept the shame and ridicule of the society at large. I suppose this is another sign of the Dharma Ending Age for in today's commercialism driven Chinese society, many join the Sangha not to seek an end to suffering, but simply to get a good paying job as a priest. So if this type of priest finds a better prospect, who can blame him for quitting? In Qing Xian's case, that prospect is probably becoming another boss in the lucrative jade business. The Dhammapada says:

"Encircled with craving,
People hop round and around like a rabbit caught in a snare.
Tied with fetters and bonds they go on to suffering,
Again and again, for a long time."

Is Qing Xian not like this rabbit?
Posted by Wayne Woo at 3:30 AM No comments: 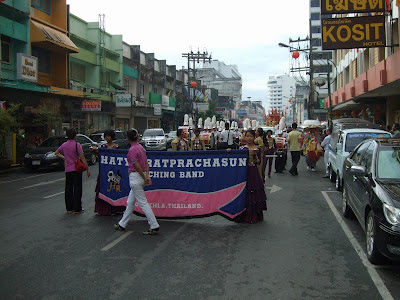 All the temples in Hadyai participated in this religious procession on the 8th day of the Chinese New Year 2012. I shot these clips in front of Kosit Hotel on that festive day.
Posted by Wayne Woo at 4:27 AM No comments: